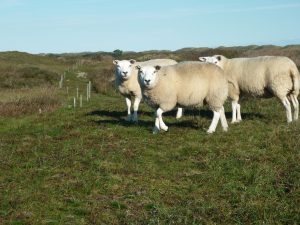 The Texel sheep, a moderately sized animal native to the Isle of Texel, is also known as the Texelaar, Texelse, Improved Texel or Verbeterde Texelse. They are primarily used for meat and are lean, muscular animals.

As a meat sheep, the most important characteristic of the Texel is its body type. They are extremely muscular and lean. Texels are one of the most common sires in Europe. Texels are very adaptable animals and can survive in almost any conditions. Texel ewes usually give birth to twins or multiples and are very good mothers.

While primarily a meat sheep, the fleece of the Texel breed is also of very high quality. Texels grow quickly, making Texel breeding a lucrative endeavor.

An attractive animal, the Texel breed has very good conformation. The broad head is white and polled with black nostrils. There is no wool on the face or lower legs, but there is wool behind the ears. The Texel’s large ears are white and can have black spots. Their neck is quite muscular, especially in the rams, and of moderate length. The Texel’s wool is usually white and quite dense.

The Isle of Texel, off the coast of Holland, is the native home of the Texel breed. The breed developed in the nineteenth century, probably from mixing Old Texels with Lincoln and Leicester Longwools in the mid 19th century. The breed was created to produce a lean carcass. Texels were not imported to North America until 1985, when a flock of Texels was imported to the Meat Animal Research Center.

These animals, kept in Nebraska, were kept under quarantine for five years when they were finally made available to private breeders. Today, the Texel is one of the most popular terminal-sires in Europe. They are very common in France, where they were first brought in 1933, and in Great Britain.