The Finnsheep is also known as the Finn. It is native 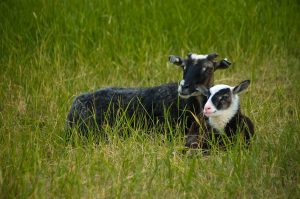 to Finland. Finns are very friendly animals that produce lots of high quality wool. Finnsheep usually yield between four and eight pounds of high quality wool. It is very soft and fine. Hand spinners enjoy working with the Finn’s wool because it is easy to blend with other materials.Finnsheep are also valued for their lambing capacity and the quality of their meat. Finn lambs are very lean and tender. The breed is very prolific and ewes usually have triplets or quadruplets.

The rams are sexually mature between four and eight months of age, and the ewes are mature by the time they are one year old. The Finns are known for their friendly personality. They are very hardy animals and can withstand severe temperatures. They eat bracken and leaves as well as pasture. Moderately sized animals, Finn ewes weigh between 130 and 180 pounds and the rams weigh between 170 and 240 pounds.

They are usually white although some Finns are black and herds can be of both colors. The wool, as mentioned above, is very soft and fine. The Finn’s back is strong and straight. They have a wool-covered, hair-tipped tail that is between four and six inches long. The Finn’s head has neither wool nor horns, but is covered with hair. The head is long and has clear eyes that are rimmed in a darker color. Their legs are straight and do not have wool below the knees. 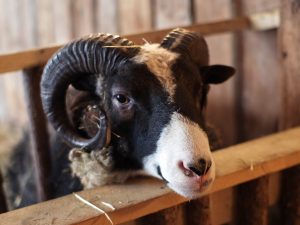 The Finnsheep is from Finland. The first importation to North America occurred in 1966, when the University of Manitoba, in Canada, imported several sheep. The breed is still rare in the United States and Canada. Very few importations have occurred. They are common in Finland where the breed has been developing for hundreds of years. A breed known as the mouflon once lived wild on Corsica and Sardinia, and it is believed the Finn is descended from that animal. Other ancestors of the Finn are Scandinavian short-tailed sheep.

The Finn was developed to be able to survive in rough climates and on very little feed. In 1918, aficionados of the Finnsheep formed the Sheep Breeders Association to develop and promote the breed. The numbers of Finnsheep outside of Finland have been steadily increasing for about fifteen years.