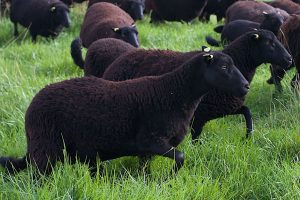 The Black Welsh Mountain Sheep is today very highly prized for its aesthetic worth, perhaps more often used for decoration than for either wool or meat. The Black Welsh Mountain Sheep is the only sheep native to the British Isles that is entirely black. They are small sheep – ewes are listed at an average of 100 pounds (45 kilograms) and rams between 132-143 pounds (60-65 kilograms). Some purebreds can grow larger averaging 150 pound or so. On the flip side, very small rams and ewes generally result from long term inbreeding, a practice best avoided. Black Welsh mountain sheep have a long, undocked tail. 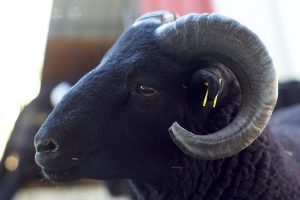 One ram died in quarantine with no progeny and several ewe lines were also lost. The American Black Welsh Mountain Sheep Association is in the process of doing a full genetic analysis of all living sheep and will be reporting our results in the 2001 Flock Book. The original importer, Mr. Tom Wyman, is the president of that association. His flock consists of approximately 200 animals. There are about 500 animals alive in North America at this time with the remainder in the hands of the 45 active breeders of these lovely sheep. There are also flocks in Canada.

Because Black Welsh Mountain are smaller than other breeds it is important to make sure they are not overfed. In addition they can escape from smaller areas than other sheep so it is important that their enclosures be fenced. As a breed, they are highly resistant to diseases, particularly foot rot and flystrike. The Black Welsh Mountain Sheep breed between February and March. They are very good breeders and rarely have any problem with childbirth. They rarely give birth to more than one lamb at a time. The mothers are very protective and usually hide to give birth.