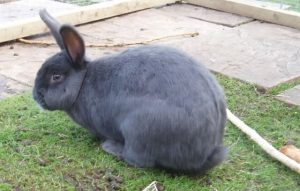 A recent discovery in the United Kingdom, the Vienna Rabbit is actually an older breed of rabbit! The Vienna is truly a great find because of its sweet, gentle disposition and lovely coat!

Gentle enough to play even with children, the Vienna Rabbit is incredibly docile. Because of its longer coat, it does require quite a lot of care and attention to grooming. They also need lots of space in which to be active, as Vienna Rabbits are a larger breed.

Any effort you make with your Vienna Rabbit will be well rewarded- these bunnies are beautiful and friendly enough to convince anyone to fall in love with them immediately!
Vienna’s come in many different colors some of the most common are white, blue, black and agouti.

Other colors include brown, grey, and blue-grey. They weigh between eight and twelve pounds, and have bodies of cylindrical shape. Their chests are deep and the entire rabbit is well muscled, curving roundly toward the hindquarters.

Vienna Rabbits have straight, strong, medium length legs. They carry their five-inch long ears erect from their proud, broad heads. The coat is thick and is full of guard hairs, giving it a silky, lustrous sheen and texture.

The eyes should be gray-blue and the nails dark. Vienna Rabbits color coordinate: their whiskers match their body color! Vienna Blue Rabbits have a rich, shiny, dark-slate blue top coat.

Occasionally, the belly and tail are less lustrous than the rest of the rabbit’s body. The undercolor should be a lighter shade of blue and should extend to the skin. Vienna White Rabbits are immaculately white.

Their eyes should be a light blue color. On the whole, Vienna Rabbits should appear alert and hale. Vienna Rabbits originated in Austria. Recently they were discovered in the United Kingdom where today they are highly valued as show animals and as pets.

In show, your Vienna Rabbit will be disqualified for appearing unhealthy; for example, illness; blindness (even partial); parasites; soiled fur or eyes; scabby, bleeding, or sore pads on the feet; or any evidence of fur trimming or dyeing.

Also, the wrong color eyes will disqualify your Vienna Rabbit along with coloration that is extremely light or extremely dark, pendant or tipped ears, deformed or mutilated teeth, crooked tail, or bent or bowed feet and legs.

Vienna Rabbits are marked faults in show for bare pads, soiled or matted fur, genitals, feet, or ears, toenails that are too long, listlessness, large dewlaps present in does, uneven coloration, or rear feet which are not aligned with the body in a parallel line.