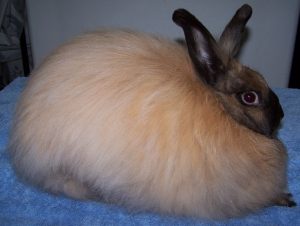 A strikingly beautiful rabbit, the Swiss Fox Rabbit was a rare breed until quite recently! Though docile in temperament, the Swiss Fox has hair, which is so long that it may prove too time-consuming to groom as a pet rabbit that will not be shown.

The Swiss Fox Rabbit is of a medium size and has a striking appearance! It is not the best house pet or children’s pet simply because its lovely coat is so long and requires so much care. For those seeking a somewhat rare pet to show, the lovely Swiss Fox Rabbit is ideal and will reward its handler with its docile temperament.

With fur as long as two inches, the Swiss Fox Rabbit also has a part down the middle of its spine, as its fur should lie flat! Swiss Foxes have ears that stand four inches upright, and generally weight five and a half to seven pounds.

These rabbits are strong and have somewhat round bodies. Swiss Foxes have well-defined muzzles and necks so short as to be nearly nonexistent! The legs, shoulders, and chest are all strong and well-muscled, with the legs of medium length and the chest being deep.

Its origins are uncertain, but many people believe the Swiss Fox has Swiss or German roots. The Swiss Fox Rabbit is not an ideal pet for everyone because its long hair requires so much time to groom!

If it is not cared for meticulously, the rabbit will become uncomfortably matted or may develop skin problems. Hair which is over two and three quarter inches long will disqualify a Swiss Fox Rabbit in show, as will white nails.

White whiskers will disqualify colored rabbits, as will odd or walleyes. A coat which is rusty, too light, or patchy in color will eliminate a Swiss Fox Rabbit from a show, in addition to wooliness in the coat. Swiss Fox Rabbits must not resemble Angora Rabbits, including furnishing on the tips of the ears.