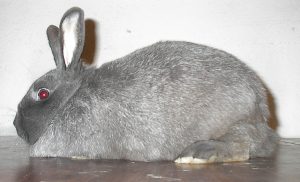 Silver Foxes have great temperaments and a very strong maternal instinct. They reproduce well and lovingly raise large families! They are shown as a six-class breed in the American Rabbit Breeder’s Association (A.R.B.A.).

The Silver Fox is also quite docile and loving towards its handler, making it a great companion. Silver Fox Rabbits are quite large, with bucks averaging between nine and eleven pounds with nine and a half pounds being idea.

Does are slightly larger at between 10 and 12 pounds the ideal is 10.5 pounds. They are accepted in black or blue, though only black is recognized at the moment. The fur of the Silver Fox grows to about one and a half inches in length, according to the breed standard.

When the fur is brushed from back to front, it will stand erect but must be stroked from front to back to lay it back down. According to the breed standard the fur should have a slightly coarse texture.

Black Silver Foxes have brown eyes; blue have blue-gray eyes. The black color should run deep to the skin with a slate under color. The body of the Silver Fox Rabbit is medium in length with well-filled shoulders and hindquarters.

Silver Fox Rabbits should be medium boned. Being a commercial breed, medium bone is preferred to heavy bone. They have medium sized heads and ears, and their necks are quite short. Silver Foxes also have slightly arched backs and broad legs.

They were developed from the by crosses between the Checkered Giant and the English Silver Rabbit. In 1929 the name “American Silver Fox” was given to the breed. The Silver Fox is not as frequently shown as they were in 1973, but many dedicated breeders today are working hard to bring the breed back.