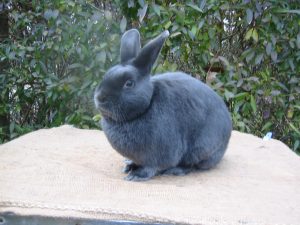 The Satin Rabbit is a truly striking breed. Their coats are incredibly lustrous and shiny, making them spectacular to behold. In addition to amazing good looks this rabbit also has a beautiful personality making him well suited as a pet.

The Satin Rabbit is well known for his friendly disposition. They generally do not mind being handled, and seem to enjoy being petted, making them ideal candidates as pet rabbits.

Their large size, however, may make them unsuitable for small children who could have trouble holding them. The care of Satin rabbits does not differ greatly from that of other rabbits, they should be housed in a cage that gives them plenty of room for movement.

If you are breeding you need a cage that will give the doe and her litter plenty of room. Like other rabbits they need shelter from poor weather and drafts. It is equally important to make sure that predators cannot enter the cage.

A fairly large rabbit, the mature male Satin weighs between eight and a half and ten and a half pounds, with mature females being a little larger at an average of nine to eleven pounds. Their body should be well balanced, with a rise starting at the bottom of the neck, peaking at the hips, and then sloping down to the tail.

The Sable’s ears stand upright and should be in proportion with the rest of their body and their head. They come in black, blue, Californian, chinchilla, chocolate, copper, red, ruby-eyed white, broken (any recognized color in combination with white markings EXCEPT Californian and White), Siamese and most recently Otter.

The ARBA has recently recognized Otter, which is a new variety, recognized as a group to include the following: Black Otter, Blue Otter, Chocolate Otter, and Lilac Otter. All colors compete together.

The mutation, which gives the Satin its glorious sheen, causes the hair shafts to be thinner than those of other rabbits, resulting in its unique shine. Their fur should be close together, with soft under fur.

The Satin Rabbit originates in the United States, discovered in the 1930’s. Walter Huey of Indiana discovered the Satin mutation in a litter of Havana Rabbits. Mr. Huey then bred rabbit displaying the “satin factor” with other breeds, thus leading to the rabbit known as the Satin today. In addition to being raised as pets and for the show ring, the Satin is also bred as a meat rabbit.