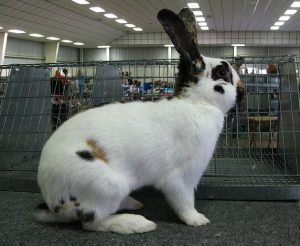 Its coat is thick and silky, but not so long that it is unmanageable. Rhinelander Rabbits are shown as a four-class breed, and young Rhinelanders may be shown in classifications of rabbits more advanced in age.

The Rhinelander Rabbit generally grows to eight pounds, with does being half a pound heavier than bucks. Their backs are well arched, giving the Rhinelander a very graceful appearance though these rabbits are somewhat heavyset.

Rhinelanders should have front legs of medium bone, with strong back legs. The feature that makes Rhinelander Rabbits unique, however, is their unusual tricolor marking. Set on a background of white, the Rhinelander Rabbit’s face is marked with a well-defined butterfly of black and yellow!

The butterfly’s wings circle around the Rhinelander’s eyes and the lower wings extend down below the rabbit’s lower jaw. The patches are of both black and yellow, with the exception of the Rhinelander Rabbit’s cheek patches, which should be a solid shade. The furry ears of this rabbit are also colored!

Rhinelander Rabbits have a saddle marking also, which extends from nape to tail! Their sides have six to eight smaller patches, and both the saddle and flank patches are of two colors. The toenails of Rhinelander Rabbits are a delicate pinky white shade. Rhinelander Rabbits, in addition to striking coloration, have fur that is silky and dense, a pleasure to touch.

No one really knows the Rhinelander Rabbit’s true origins, though it is speculated, true to the name, that these rabbits come from Germany. It is speculated that they arose from a cross between the Japanese and English Butterfly Rabbits.

Throughout the years, the Rhinelander Rabbit was quite a challenge to breeders and handlers because it was one of the very few tricolored rabbit breeds. In show, your Rhinelander Rabbit will have faults marked for uneven or indistinct butterfly or saddle outlines or for breaks in these patterns.

Wall eyes or facial marks aside from the cheek patches will be marked against the rabbit, as will white hairs at the base of the ears or in any colored spot. Too few patches or too many, in addition to patches which are too large, too small, or touching the saddle, on the flanks are all faults.

Patches that are only one color, save the cheek patches, are a disqualifying fault, as are different colored eyes or a skewed tail. A fawn coloration which is sooty or a butterfly marred by white hairs will also count against your rabbit.

Rhinelanders are great mothers and have large litters. However, the kits tend to be fairly frail until they are about three and a half months old and may be prone to disease. Great care must be taken to keep the habitat very clean.