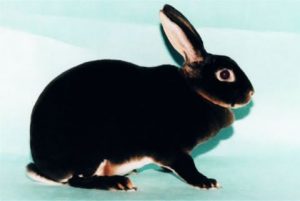 Like most domestic rabbits, the Tan Rex Rabbit is kept as a meat rabbit. Because of its rich and velvety coat, these rabbits have been valued for years by breeders and furriers alike.

They make particularly interesting show animals. Tan Rex Rabbits require regular grooming to keep their incredible coats from becoming uncomfortably matted. Because their plush fur is so short, Tan Rex Rabbits are easier to care for than most longhaired rabbits.

Tan Rex Rabbits are so soft because their guard hairs and undercoat hairs both grow to just over a half inch in length, giving the coat a uniformly short and thick texture and appearance.

These rabbits have medium strong bones and their bodies are nicely curved. A small dewlap may occasionally be seen in Tan Rex Rabbits, and this is not considered to be a fault as long as it is proportional to the rest of the rabbit’s body.

Tan Rex Rabbits make truly lovely show animals and pets! Tan Rex Rabbits have their roots in France. Beginning in 1919, Rex kits, which had previously been killed as runts, were bred by a French farmer named Desire Caillon for their interesting mutation.

A gentleman named Gillet shared Caillon’s interest and introduced the Rex Rabbit as a new class of show rabbit. Because of the velvety coat, which Rex Rabbits sported, furriers soon developed a passion for Rex Rabbits as well.

Tan is just one of the variety of colors which Rex Rabbits now proudly display. Tan Rex Rabbits will be disqualified from show if their eyes are any color save that of the breed standard or if they exhibit any white hairs or spots. Some Tan Rex Rabbits have grayish rather than glowing tan fur tops and this is also a fault.