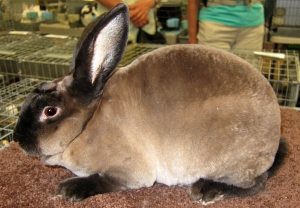 These rabbits are as soft as children’s stuffed toys, and their short fur is highly valued for its velvety softness. Sable Rex Rabbits do not require as much grooming as breeds with longer hair, but their coats will still require your attention on occasion.

These sweet rabbits make lovely soft pets and their unique fur is sure to win your acclaim! Sable Rex Rabbits have short, dense fur that grows to a little over a half inch in length.

Its dense, unique texture is created by guard hairs which match the undercoat hairs in length. Sable Rex Rabbits also have short whiskers, which may be curly! Their bone structure is of medium thickness, and the entire rabbit has a graceful appearance and curve.

Sable Rex Rabbits have ears that stand up straight off of broad heads, and may be allowed a small dewlap in keeping proportionally with the body. The prettiest feature of the Sable Rex Rabbit is the saddle marked in its soft curly fur of a dark sepia color.

The saddle fades toward the flanks into a rich chestnut brown, and the chest is also of the same color. Sable Rex Rabbits have an undercoat of the same shade as the top coat.

They have alert brown eyes, which may have a ruby tinge glistening in them! Generally, buck Sable Rex Rabbits weigh eight pounds and females are about a pound heavier, though lighter weight Sable Rexes are preferred because of their less stocky shape.

Rex Rabbits were found in rabbit litters for many years but were killed because of their mutation until, in 1919, a French farmer named Desire Callion decided to breed them.

His kits originated from gray rabbits, and his experiment sparked the interest of M. Gillet, who introduced the Rex Rabbit as an entirely new class of rabbit. Sable Rex Rabbits have about as much meat as standard meat rabbits, but are preferred today by furriers for their coats of dense, thick velvet.