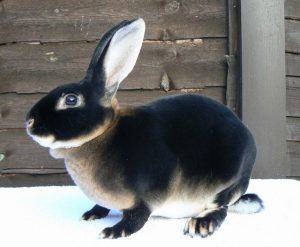 With its unusual, dark, and striking appearance and coat so soft it could be made of plush, the Otter Rex Rabbit is not a pet to miss! Soft as a plush toy animal, the Otter Rabbit is a docile and calm pet with a sweet disposition.

It does not require much grooming because its lovely soft coat is so short, but you should pay close attention to be sure the thick coat does not become matted. Like most domestic rabbits, it is a meat rabbit, though highly valued for its exquisitely textured fur.

Otter Rex Rabbit’s fur is so soft because the hairs of the undercoat grow just as long as the guard hairs of the top coat! These rabbits have an unusual appearance because they are jet black on top and pale buff on the belly!

The cream color on their bellies extends to the undersides of the tail and chin and parts of the chest, which is also black in parts and merges with the rest of the coloring on the Otter Rex Rabbit’s body. Although the Otter Rex Rabbit has forefeet which are ebony black, the hind legs show some of the tan coloring, which is visible on the belly and parts of the flanks.

The Rex fur is soft, short, and dense, averaging about three quarters of an inch in length, and whiskers may be curly or wavy! Male Otter Rex Rabbits weigh about eight pounds and does should weigh nine pounds.

These rabbits are allowed small dewlaps as long as they are proportionate to the rest of the Otter Rex Rabbits body. Their bones are medium strong and these rabbits tend to look awkward if overweight. Nevertheless, a healthy Otter Rex Rabbit is incredibly lovely and unusual looking!

The Rex Rabbit was developed in France by Desire Caillon, a farmer, in 1919. He was drawn to the kits in a litter of gray rabbits, which had a mutation giving them shorter hair than the others. After much selective breeding, another gentleman named Gillet introduced the Rex as a new class of rabbit that today comes in 15 different colors!

Otter Rex Rabbits will be marked faults in show if they have white or tan hairs anywhere except in the areas where they belong. Rusty tinges or brown tinges in the coloration on the body are also faults. White spots or eyes any color other than brown will disqualify your Otter Rex Rabbit from show. Otherwise, five points will be allotted for color and five for pattern, of the ten Rex color points.