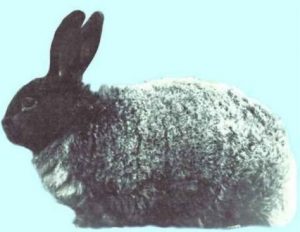 The Opossum Rex is rex type of rabbit, with velvety soft fur that is very sought after. Opossum Rexes also make good pets, as well as show rabbits. The Opossum Rex has enjoyed much popularity in the past, especially as a show animal.

They have nice, soft fur and are accepted in many different colors. Opossum Rexes, like other rexes, are not uncommon to the pet industry. The Opossum Rex weighs about eight and a half pounds and is a medium sized rabbit.

The Opossum Rex is elegant looking, with medium bones. They have a wide head and ears that stand upright. The fur of a rex breed is quite unique. Their under fur is just as long as their guard hairs, which causes their fur to fell velvety.

Their fur should be about an inch and a half long and they have short, curly whiskers. The Opossum Rex is accepted in any color, though black is the most common. An inch long base is the color of the rabbit, while the top half-inch is white.

Rex types of rabbits have appeared occasionally in some litters for a long time. It is reported that they used to be killed off as runts. However, Monsieur M. Gillet, from France, was the first person to exhibit a Rex.

D. Callion, also from France, tested rexes and discovered that they bred true. Mr. T. Leaver, from Kent, England, developed the Opossum Rex in 1924. He bred them from the Chifox Rex, a chinchillated fox breed of rex rabbit.

Then woolly Argentes were bred into them, which made the Opossum Rex silvery. Today the Opossum Rex does not enjoy the popularity of its glory days, but it is still widely bred.