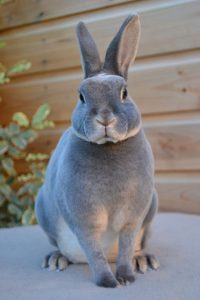 With a short coat that feels as soft as plush, curly whiskers, and blue eyes, the Opal Rex Rabbit could easily win anyone’s heart. Opal Rex Rabbits are easy to care for compared to longhaired rabbits, because their short velvety coats do not require much grooming.

They need some attention, however, as they are thick and may become matted. Opal Rex Rabbits are meat rabbits, just like any other meat rabbit, except that their coats are so soft that furriers value them. Opal Rex Rabbits make soft, docile pets and unique show animals.

The Opal Rex Rabbit is characterized by its soft, thick coat, which grows to just over half an inch in length. With a blue under color and blue gray eyes, these rabbits are strikingly colored.

The top color of the Opal Rex Rabbit is a medium blue of rich hue, which extends over the top and sides of the rabbit. This lovely blue color fades into a golden color, which in turn fades into a white or light tan belly.

Since all Rex Rabbits have guard hairs the same length as the hairs of the undercoat, the colored top coat and slate blue undercoat create a striking appearance. Opal Rex Rabbits grow to about eight pounds, with does being a pound heavier than bucks.

They are lovely rabbits with an arched back and strong legs. With erect ears and curly whiskers, Opal Rex Rabbits are simply lovely. Developed in 1919 from a litter of mutated gray rabbits by a French farmer named Desire Caillon, Rex Rabbits were first exhibited by a Monsieur Gillet, who introduced them as a new class of rabbits.

Previous to this point, Rex Rabbit kits had been killed as runts or freaks. Fortunately, because of Caillon and Gillet’s interest, a variety of colors of Rex Rabbit are treasured today, including the beautiful Opal Rex.