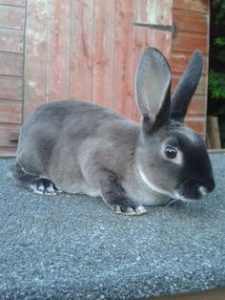 These rabbits make docile, sweet pets and do not require so much grooming as their longer-furred counterparts! Be sure to care for your Marten Sable Rex Rabbit’s coat regularly and carefully, to prevent uncomfortable mats from forming.

The Marten Sable Rex Rabbit is an extremely lovely version of the normal-furred Marten Sable Rabbit but with short, “Rexed” fur. This means its coat has guard hairs, which are of the same length as the under coat hairs: a little longer than half an inch.

Their adorable ears stand up straight from their broad faces, and the Marten Sable Rex Rabbit has much shorter whiskers than their normal-furred counterparts. These may also be curly!

The Marten Sable Rex was developed from standard gray rabbits. Frequently, Rex mutations were seen in rabbit litters, but these were usually killed as runts. In 1919, a French farmer named Desire Callion decided that the short, dense fur was attractive, and began to breed Rex rabbits.

They attracted the attention of M. Gillet with their soft, velvety fur and he soon introduced the Rex as a new class of rabbit. Marten Sable Rex Rabbits will be disqualified in show for white hairs or patches, or for eyes that are any color than specified in the breed standard.

Take care that the thick, luxuriant fur of your Marten Sable Rex Rabbit does not become matted, as this will make your friend uncomfortable