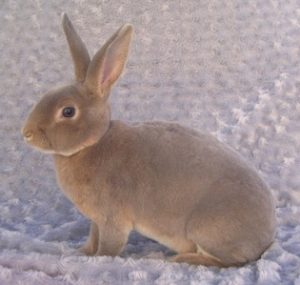 One of the more strangely colored varieties of Rex Rabbit, the Lynx Rex is particularly eye-catching with its two toned, velvet soft fur! Lynx Rex Rabbits are extremely soft because of the texture of their fur.

They are meat rabbits but are highly valued for their plush-like coats. In addition, Lynx Rex Rabbits are a bit easier to care for than longhaired rabbits because their fur is short.

In order to prevent matting, which will make your furry friend uncomfortable, it is extremely important to groom your Lynx Rex Rabbit regularly and carefully. These rabbits make unusually soft and sweet pets and striking show animals!

Lynx Rex Rabbits are so soft because the hairs of their undercoats are the same length as their guard hairs, just over half an inch. Their heads are broad and they carry their ears erect. Lynx Rex Rabbits may have curly whiskers.

Bucks grow to eight pounds and does are about a pound larger. Lynx Rex Rabbits have a white undercolor, and all the fur on their bellies is white to the skin! It is their bright orange topcoat, which gives the Lynx Rex Rabbit its unique appearance.

The top of the rabbit is an orange color, and these bright hairs are tipped in lilac! This makes the Lynx Rex Rabbit nearly glow with a shimmering, silvery light. Their bright eyes are a blue-gray color.

Rex Rabbits had shown up in litters of domestic meat rabbits for centuries, but had been killed off as runts until 1919, when Desire Callion, a farmer in France, began to take an interest in the short haired kits.

A gentleman by the name of Gillet became interested as well and began exhibiting these mutated gray rabbits until they became their own class of rabbit! In show, Lynx Rex Rabbits face tough standards because the lilac tipped hairs may make them appear close to Opal Rex Rabbits if the fur is more blue than orange.

This will be marked as a fault, as will hairs with too much lilac, as tipping which extends too far will mar the brilliant two-toned effect which Lynx Rex Rabbits are known for.