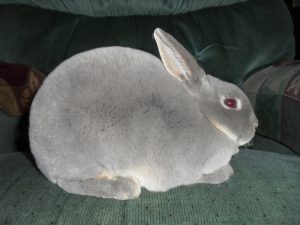 Like most domestic rabbits, the Lilac Rex Rabbit is a meat rabbit. Because of its rich and velvety coat, these rabbits have also been valued for years by furriers and show people.

Because their plush fur is so short, Lilac Rex Rabbits are easier to care for than most long-haired rabbits, but will still require regular grooming to keep their incredible coats from becoming uncomfortably matted.

If cared for correctly, the Lilac Rex Rabbit makes an unusual and docile friend or show animal. Lilac Rex Rabbits are characterized by their lilac color, which is essentially a shade of gray-brown so delicate that it is nearly light purple.

The fur of Lilac Rex Rabbits grows to just over half an inch in length, and may have pinkish hints. The color has been described also as “dove gray”. The under and top colors are the same, providing a lustrous and rich appearance.

The color of Lilac Rex Rabbits should be very even, their eyes should be a gorgeous blue-gray color, and a touch of ruby is permitted. These gorgeous rabbits have an undercoat that is the same length as the guard hairs, giving the coat its plush feel and thick appearance.

Lilac Rex Rabbits carry their ears erect on their broad heads, and have medium thick bones. Generally, bucks grow to eight pounds and does to nine, although lighter weight Lilac Rex Rabbits tend to have a more graceful appearance.

Their whiskers may be curly and a small dewlap, so long as it is in proportion to the rest of the rabbits body, is allowed when showing the Lilac Rex. Lilac Rex Rabbits have gone through many years of trial and error to develop the lovely coat they exhibit today.

Beginning in 1919, the Rex mutated kits, which had previously been killed as runts, were bred by a French farmer named Desire Caillon for their interesting mutation. A gentleman named Gillet shared Caillon’s interest and introduced the Rex Rabbit as a new class of show rabbit.

Because of the velvety coat that Rex Rabbits sported, furriers soon developed a passion for Rex Rabbits as well. The Lilac Rex Rabbit resulted from a cross between Havana and Blue Rexes in England, although for years the color tended to be splotchy or false and even rusty.