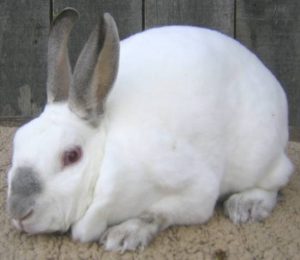 These rabbits are also prized by show people and pet owners alike because of their great personalities and lovely thick fur! Since the fur is so short, the Himalayan Rex Rabbit requires much less grooming than most longhaired rabbits, though it remains extremely important to groom your rabbit regularly to prevent uncomfortable mats from forming.

The Himalayan Rex Rabbit is a gorgeous, curvaceous rabbit with bones of medium thickness. It holds its ears proudly straight up from its broad head. The Himalayan Rex Rabbit’s fur is soft, short, and dense, averaging about three quarters of an inch in length, and the whiskers or vibrissae may be curly or wavy.

The only requirement is that it be in proportion to the rabbit’s body. The Rex Rabbit was developed in France by Desire Caillon, a farmer, in 1919. He was drawn to the kits in a litter of gray rabbits which had a mutation giving them shorter hair than the others, and after much selective breeding M Gillet became interested in the breed.