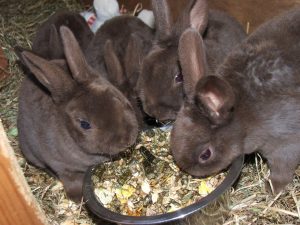 Because of its plush-like, attractively colored coat, it has been extremely valued by furriers for years. As a house rabbit, the Havana Rex Rabbit is easier to care for than longhaired rabbits because of its thick, short coat. These docile and sweet pets are extremely lovely and are soft as children’s toy animals.

Growing to about eight pounds, Havana Rex Rabbit bucks are about a pound lighter than females. Their velvety fur grows to just over half an inch, and is complimented by erect ears and adorable curly whiskers. The fur has such a soft texture because the guard hairs of the topcoat are the same length as the hairs of the undercoat!

Rex Rabbits appeared in litters of rabbit kits as mutations, but until 1919, these different looking kits were killed off as mutant runts. In 1919, a French farmer named Desire Caillon experimented with breeding these Rex Rabbits and found that the type would come out in the next litter when crossed.

A gentleman named Gillet shared Caillons interest and began exhibiting the Rex Rabbits, introducing them as a new class of rabbit. Since then, Havana Rex Rabbits became extremely popular, valued in the fur trade for their soft velvet hair, and also as breeders, used in crosses to develop new colors of rex rabbit! Occasionally, a Nutria Rex kit will be born as a mutation in a litter of Havana Rex Rabbits.

Your Havana Rex Rabbit will be disqualified from show if it shows patches of white on any part of its body or if its eyes are a different color than breed standard specifies. Be sure to groom your Havana Rex Rabbit regularly to prevent its soft, thick coat from becoming uncomfortably matted.