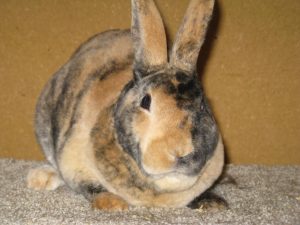 The Harlequin Rex Rabbit is one of the most amazing-looking rabbits you will find! With its plush-like fur and intense coloration, this docile rabbit is an incredible pet! Harlequin Rex Rabbits are so soft because of the texture of their fur! They are meat rabbits but are highly valued for their plush-like coats.

In addition, Harlequin Rex Rabbits are a bit easier to care for than longhaired rabbits because their fur is short. To prevent matting, however, which will make your furry friend uncomfortable, it is extremely important to groom your Harlequin Rex Rabbit regularly and carefully. These rabbits make unusually soft and sweet pets and striking show animals!

Harlequin Rex Rabbits are incredibly velvety because the hairs of their undercoats are the same length as their guard hairs, just over half an inch. Their heads are broad and they carry their ears erect. Harlequin Rex Rabbits may have curly whiskers that are much shorter than the whiskers of other rabbits, another striking feature!

The most distinguishing feature of the Harlequin Rex Rabbit is its beautiful coat- harlequin, as the name would imply, and impressive in thickness and texture! Harlequin Rex Rabbits sometimes have dewlaps which are permissible in show! The only stipulation is that the dewlap is in proportion to the body, and it must be well rounded.

Rex Rabbits had shown up in litters of domestic meat rabbits for centuries, but had been killed off as runts until 1919, when Desire Callion, a farmer in France, began to take an interest in the short haired kits. A gentleman by the name of Gillet became interested as well and began exhibiting these mutated gray rabbits until they became their own class of rabbit!