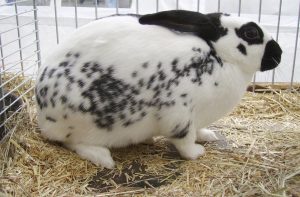 The Dalmation Rex Rabbit looks more like a child’s toy animal than a living pet! With its incredible plush to the touch fur and its bright patchy spots, this docile pet is sure to please. Dalmation Rex Rabbits are simply adorable because of their spotted coloration, and they are easier to care for than longhaired breeds of rabbits because their short fur does not easily become tangled.

They make sweet, lovely friends and beautiful show animals! The Dalmation Rex Rabbit grows to eight pounds, and females often grow to nine pounds! The carry their ears straight in the air and have broad heads and medium strong bones.

Dalmation Rex Rabbits are characterized by their thick soft fur. Guard hairs and an undercoat of the same length (a little more than half an inch) are responsible for this effect. These rabbits are allowed a small dewlap. This must be in proportion to the rest of the rabbit’s body, however.

Dalmation Rex Rabbits may have black patches about their eyes and ears. Their coats are a lovely bright white, and are sprinkled with colored patches and spots! These may be solid or they may be bi-colored, and often the spots and patches are black, sooty fawn, brown, orange, or blue!

The eyes may be a variety of colors so long as they match the spots. The great thing about the Dalmation Rex Rabbit is the wide variety of coloration possible with all the spots and color options! Rex Rabbits had shown up in litters of domestic meat rabbits for centuries, but had been killed off as runts until 1919, when Desire Callion, a farmer in France, began to take an interest in the shorthaired kits.

The mutants came from a litter of normal gray rabbits, and when crossed, it was found that they bred true to the short fur type! A gentleman by the name of Gillet became interested as well and began exhibiting rexed rabbits until they became their own class of rabbit!