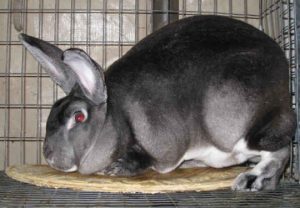 The Chinchilla Rex is one of the many color variations of the Rex Rabbit. Like other rexes they have velvety soft fur, which is highly coveted. The Chinchilla Rex male weighs about eight pounds, while females are larger averaging nine pounds.

They are a medium to large rabbit. The Chinchilla Rex is elegant looking, with medium bones. They have a wide head and ears that stand upright. The fur of a rex breed is quite unique. Their under fur is just as long as their guard hairs, which causes their fur to fell velvety.

Their fur should be about an inch and a half long and they have short, curly whiskers. The Chinchilla Rex’s coat is bred to resemble that of the rodent Chinchillas. The base of the undercoat is dark slate with is a thinner layer of light pearl-colored fur lining the intermediate layer, and the top layer is very thin and black.

The color of the body goes all the way down the sides, until it reaches the belly. The belly coloration is also interesting; with the top all in white, but the base can vary from blue to white. They have distinct, narrow, light pearl circles around their eyes. Eyes are seen in brown and blue gray, though brown is the preferred color.

Rex Rabbits have occurred spontaneously in some litters for years, though originally they were not accepted and it is reported that they were even killed off as runts. Monsieur M. Gillet, from France, was the first person to exhibit a Rex in the show ring. D. Callion, also from France, tested rexes and discovered that they bred true.