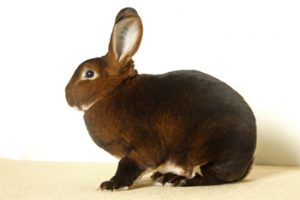 The Castor Rex Rabbit is gorgeously colored and incredibly pleasing to the touch, making it both an unusual and lovely household pet! Like most domestic rabbits, the Castor Rex Rabbit is a meat rabbit. Because of its rich and velvety coat, these rabbits have been valued for years by show people and furriers alike.

Castor Rex Rabbits require regular grooming to keep their incredible coats from becoming uncomfortably matted. Because their plush fur is so short, Castor Rex Rabbits are easier to care for than most longhaired rabbits. If cared for correctly, the Castor Rex Rabbit makes an unusual and docile friend or show animal.

Castor Rex Rabbits are so soft because their guard hairs and undercoat hairs both grow to just over a half inch in length, giving the coat a uniformly short, lustrous, and thick texture and appearance. The top of the Castor Rex Rabbit’s broad head, body, and legs, is a rich color, usually a dark chestnut color though it may also be a mahogany brown.

This lovely coloring fades into a ring of orange or red, fading to a belly of white or tan fur. The undercolor should be slate blue in the orange ring, and it should be blue on the belly. Each of the Castor Rex Rabbit’s hair should be evenly tipped in an accent of black.

A small dewlap may occasionally be seen in Castor Rex Rabbits, and this is not considered to be a fault as long as it is proportional to the rest of the rabbit’s body. Castor Rex Rabbits have their roots in France. Beginning in 1919, the Rex mutated kits, which had previously been killed as runts, were bred by a French farmer named Desire Caillon for their interesting mutation. 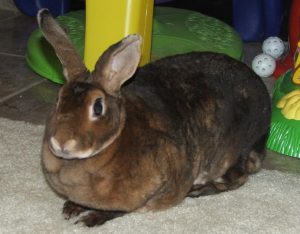 Castor Rex Rabbits will be disqualified from show if their eyes are any color save brown or if they exhibit any white hairs or spots. Common faults include a “salt and pepper” effect on the fur when hairs are tipped with white or gray rather than black.

Undercolor on the belly, which is not blue, barred front feet, or fur with too much black are also faults. Some Castor Rex Rabbits have grayish rather than rich brown fur tops and this a fault which will be marked in show.