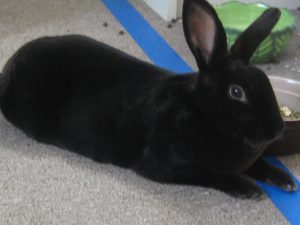 The Black Rex is one of the most popular rex rabbits, with velvety soft fur that is very sought after.
The Black Rex is very popular, especially among furriers. It is important when housing the Black Rex to keep it on clean bedding; otherwise its belly will look stained and dirty.

Maintaining the evenness of the glorious black coat is very important with this rabbit. Obviously if he is kept as a pet this is not as important, but for fur and show this is a must. The Black Rex is a popular rabbit in the show ring.

The mature Black Rex male weighs about eight pounds, while females are larger averaging nine pounds. They are a medium to large rabbit. The Black Rex is elegant looking, with medium bones. They have a wide head and ears that stand upright. The fur of a rex breed is quite unique.

There under fur is just as long as their guard hairs, which causes their fur to fell velvety. Their fur should be about an inch and a half long and they have short, curly whiskers. Black Rexes have dark, deep black fur throughout their bodies. The color should go deep into the skin.

They have dark brown eyes. They can be faulted for a brown or ruddy color, white hairs, or a dull appearance. Black Rexes used to have problems with being thin-coated, but today most of them have dense coats. A thin-coated Black Rex can still appear sometimes, though.

Rex types of rabbits have appeared occasionally in some litters for a long time. They used to be killed off as runts. However, Monsieur M. Gillet, from France, was the first person to exhibit a Rex. D. Callion, also from France, tested rexes and discovered that they bred true.