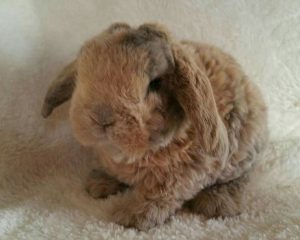 The Astrex is a rex type of rabbit, with velvety soft fur that is very sought after. The Astrex makes a good pet, as well a quality show rabbit. The Astrex is not seen very often these days, but it used to be very popular, especially as a show animal. They have soft fur and come in several different colors.

The Astrex, like other rex rabbits, makes a nice pet. Astrex rabbits have a wavy rex coat. The Astrex mutation only occurs in the Rex or Harlequin breed. The WAVE (wa) gene gives them their unique (poodle-like coat).

They are said to look like a stuffed or story book bunny come to life. The average Astrex measures between 6 and 8 pounds at maturity, making it a medium sized rabbit. The Astrex is elegant looking, with medium bones. They have a wide head and ears that stand upright.

The Astrex was once seen in black, blue and lilac. Today the lilac variation is the most common. The fur of all the rex breeds is quite unique. Their under fur is just as long as their guard hairs, which causes their fur to feel velvety. Their fur should be about an inch and a half long and they have short, curly whiskers. Rex types of rabbits have appeared occasionally in some litters for a long time.

Though originally they were not accepted as a new breed instead it is reported that they were even killed off as runts. Monsieur M. Gillet, from France, was the first person to exhibit a Rex in the show ring. D. Callion, also from France, tested rexes and discovered that they bred true.

Almost all Rex rabbits are bred for their beautiful fur. While many Rex types remain quite popular, sadly, the Astrex had all but died out around the turn of the 20th century, though some breeders are attempting to revive this unusual breed.