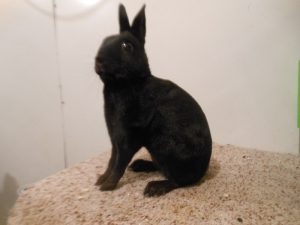 They appear to tolerate cold and heat equally well. It is reported that they do quite well on quality rabbit pellets, and show rabbits do not seem to require specialized diets to maintain show quality fur. Some male American Polish rabbits may be a little skittish when it comes to handling at first, though if they are handled regularly, they quickly get used to being held and adapt well to it.

American Polish rabbits are loaded with character and can be little clowns at times. They make excellent pets and are very entertaining. The American Polish is a dwarf breed and should not exceed three pounds. Two and a half pounds is the ideal for show rabbits.

The American Rabbit Breeder’s Association (ARBA) accepts the following color varieties: Black, Blue, Broken, Chocolate, and White. White individuals may be Blue eyed or Ruby eyed. In the show ring Blues should not have frosty or silver coats, though these are fine for pet rabbits. 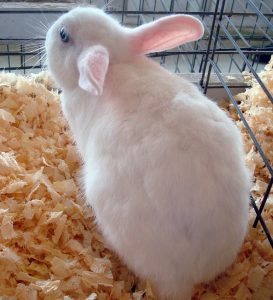 The ideal American Polish rabbit should have a flyback coat, as opposed to a rollback coat. A flyback coat, is one that “flies back” to its original position after being stroked. These coats lie close to the body. A rollback coat also lies close to the body, but it does not return to its original position as quickly as the flyback.

They do not have round flat faces like the Netherland Dwarfs do but a short full head with well filled cheeks, and when viewed from the side,the head has a slight curvature in the skull from the ear base to the nose. Their ears have a maximum length of 3 inches.

They are a compact type and are posed with their forelegs and hocks flat on the table. The body is to be smooth, small, and close coupled with hips slightly wider than the shoulders. The body’s top line should start at the ear base and rise to its highest point over the center of the hips and then fall in a smooth curve to the base of the tail. Their eyes are to be bold, expressive, and bright.

Lastly, the English Polish’s coat tends to lie much more closely against the body than the coat of the American Polish. Their date of origin is unknown. Some of the first Polish were albino forms of the Dutch rabbit.

They are not known much in Poland so the name must have been given to them for reasons of fancy. In 1884 there is mention of a polish class of 17 entries at Hull, in England. They have been raised as a fancy, exhibition rabbit ever since for many years in England and Germany.

The average litter consists of three to four babies, though as many as seven is not uncommon, and it is also not uncommon to have a litter of only one baby.