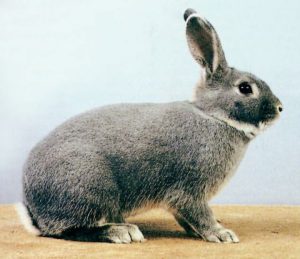 Though it remains quite new and rare outside of Western Continental Europe, the Perlfee is a gorgeous and rewarding fur rabbit for those who take the time to obtain one! Perlfee Rabbits are generally bred for their beautiful soft, pearlized fur!

Those lucky enough to own lovely Perlfee Rabbits are extremely enthusiastic about what they consider to be an extremely promising new type of rabbit! The Perlfee Rabbit has a rather cobby body type. Usually, they grow to between five and a half and eight pounds.

The chest is broad over medium boned, straight front legs, and the neck is practically invisible. Perlfee Rabbits’ eyes are gray-blue and have a ruby glow. Their ears are quite furry, with rounded tips, and are held erect.

The most amazing thing about the Perlfee Rabbit is its fur, obtaining its pearlized effect from the guard hairs. These hairs are evenly dispersed over the whole body and are light gray and dark gray over an undercoat also tipped.

The lower top two thirds of the hairs are blue-gray. The intermediate color of the underfur is light brown. Perlfee Rabbits have a topcoat that is gray blue. All shades of gray-blue are available, but the medium shade is considered by many to be the most attractive.

The underside of Perlfee Rabbits, including the insides of the legs, the belly, and the jawline, in addition to the eye circles, are all more lightly shaded. The belly actually has a top color of white! Perlfee Rabbits are characterized by a small brown triangle located at the nape of the neck, and a light brown band divides the white tummy from the blue-gray body color.

When both crosses were combined, the breed got its name, Perlfeh, which later became called “Perlfee” outside of Germany. Though apparently quite readily available in Germany and the neighboring countries, the Perlfee Rabbit may be quite difficult to obtain elsewhere!

It was not introduced to the United Kingdom and then standardized until the late 1980’s, and remains relatively rare. Breeders are quite enthusiastic about the Perlfee Rabbit and are optimistic for its popularity in coming years.

Perlfee Rabbits require quite a lot of regular and careful grooming, being a fur rabbit. This is essential in order to keep your lovely friend from becoming a mass of tangles!