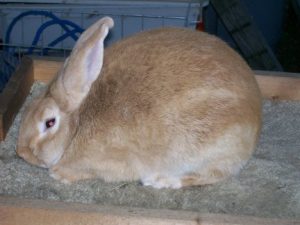 Palominoes are one of the meatiest commercial rabbits, and also one of the loveliest house pets a rabbit owner could hope to find! Palomino Rabbits take quite a while to mature, but adult Palominoes are worth the wait.

Not only do they have a higher meat-to-carcass ration than most commercial meat rabbits, but they also have very gentle personalities. They love to cuddle, but because they are so large, should not be picked up and held too often.

Because of their large size, bucks do well when kept in two foot by two foot cages; does do best in two feet by thirty inch cages, which can fit a nesting box should you plan to breed your Palomino Rabbit! Sweet, friendly Palomino Rabbits are a great addition to any pet lover’s home!

Palomino Rabbit bucks grow to about eight pounds, and females grow to around ten pounds. Their shoulders and hips are both meaty and well rounded, and their bodies are of medium length. Palomino Rabbits are gracefully curvaceous, arching up from the nape of their neck to a high point at the loins, from which the arch drops downward toward the rabbit’s tail.

Palomino Rabbits are available in Lynx and Golden colors. In the Golden color, the ideal is considered to be a wheat color, though all shades of Gold are acceptable. The topcoat should be bright gold, and the undercolor should be a lighter shade like cream or pure white.

Lynx Palomino Rabbits have undercoats that are cream or white, also. The topcoat of these rabbits is pearl gray, and there is an intermediary color of beige-orange. In show, the type or body shape of the Palomino Rabbit is more important that the color.

Palomino Rabbits were developed in Coulee Dam, Washington, by Mark Young. He envisioned a commercial meat rabbit with a lovely appearance, and just by looking at any Palomino Rabbit today, anyone could agree that his purpose was achieved!