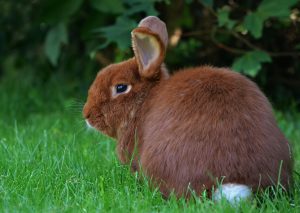 They are incredibly docile and love to be handled. Their fur is shorter than many show rabbits, making them easier to care for than longhaired animals that require excruciatingly fussy grooming! New Zealand Red Rabbits still need regular and careful attention paid to their coats, and they need quite a bit of room to run about in, being a larger breed of rabbit.

They have broad shoulders and gracefully curved backs, showing a slight arching line. New Zealand Red Rabbits have dark toenails and their bright eyes are hazel. The coat should be a very bright, shining golden tinted red, and the color should extend down to the skin.

They are not true eye circles- simply a thinning of fur around the eyes which gives the impression of a whitish eye circle! The only white allowed on these rabbits, in fact, is on the undersides of the feet and tail. New Zealand Red Rabbits should be not too dark and not too light; the coat could be described as sorrel if it were sported by a horse! 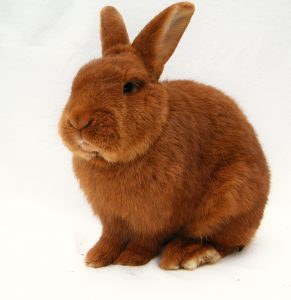 The fur grows to just about three quarters of an inch. New Zealand Red Rabbits originated in the United States. It is thought that these rabbits were produced from a cross between the Flemish Giant and the Belgian Bare Rabbit.

A similar breed of rabbit, now extinct, called the Old English Red exists today also, in the form of the French Fauve de Bourgogne and the Italian Fulvo di Borgogna. New Zealand Red Rabbits are disqualified for silvering in the coat or for having a coat that is too soft.

They will be marked faults for dark ear tips or body tops, the presence of a few white hairs in the coat, light shaded ears, face, and feet, or a white belly. Significant faults in New Zealand Red Rabbits include: excessive black or white hairs present in the coat, black ears or black ticking in the coat, long narrow body types, narrow pointy heads or the lack or guard hairs, or fur which grows too long or is too soft.