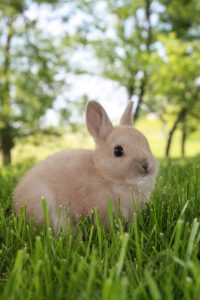 The Netherland Dwarf is a tiny, cute bunny with plenty of energy. They are very popular and come in many different colors. Netherlands Dwarfs are generally quite active and should not be kept cooped up all day.

They need lots of toys to keep themselves entertained; otherwise they will make toys out of your important papers, mattresses, and clothes. Occasionally they can bite, like most rabbits, but the best way to prevent any rabbit from biting is to handle them very often at a young age.

Biting may be caused by hormonal impulses to protect their cage. Biting for this reason can be drastically reduced by having your pet bunny spayed at an early age. The best thing to do when you’re gone is to keep them in a puppy pen and put in plenty of toys such as hard balls, cardboard tubes, and boxes.

Netherland Dwarfs will use a litter box filled with a non-cedar or non-clumping litter. They need a high fiber commercial diet and enough hay. They do need an occasional brushing. Netherland Dwarfs have a reputation for being poor tempered, but very few are actually so.

They are a hyper breed, yes, but not usually mean. Sometimes the personality changes for the worse when they hit maturity, so if you get a young rabbit as a pet, spaying or neutering is highly recommended. Otherwise, it is recommended that you purchase a rabbit that is five months or older so that you are sure of the temperament.

Mature Netherland Dwarfs should weigh two pounds, making them the smallest breed. They are dense, stout, with a round head and wide skull. Their head is set up high on their shoulders. Netherland Dwarfs have bright, bold eyes. Their ears, about two inches or less, stand up. 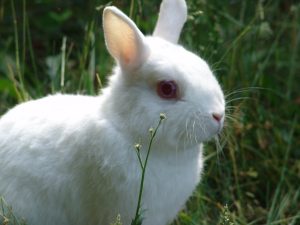 The agouti colors are: chestnut, chinchilla, lynx, opal, and squirrel. Other colors are fawn, Himalayan (which can be black, chocolate, blue, or lilac), orange, steel, and tortoiseshell. A Netherland Dwarf will be disqualified from competition if it is over two and a half pounds or if its ears are more than two and a half inches long.

Netherland Dwarfs came from Holland as a descendent of the Dutch rabbit. After World War Two, only 18 of these rabbits were left, but the English rescued nine of them. The English breeders bred them and perfected the breed. Netherlands Dwarfs were first seen in the United States in the mid-1950s.

The American Rabbit Breeders Association recognized the Netherland Dwarf as an official breed in 1969.
Because of their small ears, Netherland Dwarfs may not be able to regulate heat as well as larger-earred rabbits.

Therefore, they must be kept cool. Due to their very rounded heads, they may also be prone to getting mallocclused, or misaligned, teeth. If this happens, the teeth must be trimmed regularly.
Netherland Dwarf rabbits do well in an outdoor medium-sized hutch with a well-covered top for protection from the elements.

The hutch should contain sturdy-wired flooring (with small wire spaces), a nesting box for it to hop onto and snuggle up inside of, a salt block, a rabbit water bottle nozzle, a food bowl, a litter box, and possibly a hay rack.

In cold weather, give your rabbit a hot water bottle, and in hot weather give him an ice bottle. Make sure it always has plenty of cool, fresh water and rabbit alfalfa pellets in its food bowl. A rabbit run is also suggested so that it can get some sun on warm days. 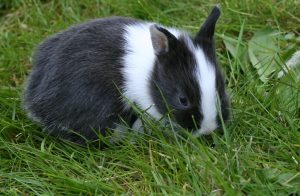 Other advantages of rabbit runs are that the rabbit can get more exercise and have a chance to eat some grass & weeds. To protect your furry friend from harsh winds, staple some cardboard or garbage bags to the outside of your rabbit’s hutch.

Also, give it some leftover vegetables or carrot shavings as a special treat. Handle and pet your Netherland Dwarf a lot, so that it will be easy for the veterinarian to work with in case it gets sick. Also remember to always make sure your Netherland Dwarf is safely locked away in its hutch each night, so predators can’t get at him.

Netherlands have small sized (one to four babies) litters and as many as half of the babies will inherit two dwarfing genes which is fatal. They tend to be skittish mothers, so they should not be bothered much until the kits are at least a week old. Some does are very poor mothers, and some do not produce enough milk.

Also, some carry a gene called the “max factor gene” that produces kits with mutations such as twisted limbs and eyes which are open at birth. Max factor kits usually die. Netherlands that produce kits with misaligned teeth or that have misaligned teeth should not be bred. Getting good show quality Netherland Dwarf babies is a challenge, but once you finally get some, you will realize that it was all worth it.