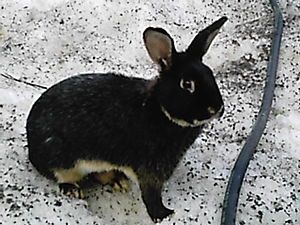 Owners of Marten Sable Rabbits will be amply rewarded by the sweet, placid dispositions of these beautiful, docile pets! With a gracefully and slightly arched graceful body, the Silver Marten Sable Rabbit’s fur is not its only lovely quality!

These rabbits weigh five to seven pounds, and their bodies are cobby and neat in appearance with well-rounded hindquarters. Marten Sable Rabbits carry their small, neat ears straight up in the air. Their eyes are also lovely, reflecting a ruby glow from their rich, bright and alert depths.

Silver Marten Sable Rabbits have coats that are dense and silky, growing to about one and a half inches in length. Their faces, with the exception of the ears, and their feet, are a dark sepia brown. From the shoulders to the rump extends the saddle, which should be the same rich, luxurious red-brown color, which fades into a lighter shade on the flanks.

Silver Marten Sable Rabbits’ nostrils are outlined in white hairs! White hairs also form a ticking down the legs, chest, and feet! Marten Sable Rabbits have a tiny white triangle located at the nape of their neck, so small that it is only clearly visible when the rabbit stretches its neck out!

The insides of their ears are also white, as are their jawlines and jowls, their eye circles, and the belly and underside of the tail! The undercolor of Silver Marten Sable Rabbits matches the top color, which should extend well down into the fur.

Because of the white guard hairs, the Silver Marten Sable Rabbit is a distinct breed from the Dark Siamese Sable. Soon after the Chinchilla Rabbit was introduced to the United Kingdom, mutant kits were born with Marten Sable coloration into litters of Chinchilla, but were regarded as runts.

In Paris, the French took an interest in these runts and showed the first Silver Marten Sable Rabbit in 1914. The British were slower, and beginning in 1919, rabbit fanciers began to be interested in the lovely coloration of these kits. Tom Leaver and David Irvine were the first to breed them.

In show, your Silver Marten Sable Rabbit will be marked faults for having its white nose outlined smudged or streaked or for having white hairs on the outsides of its ears or saddle. Faults will also be marked for white toenails, a rusty tinge in coloration, or white hairs ticking over the flanks and rump.