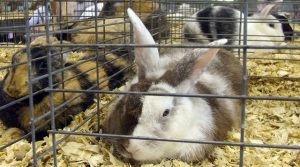 The Magpie Harlequin, also known as the “Harlie”, is a rabbit with a truly unique color pattern.They are said to be wonderful pets because of their good dispositions. Magpie Harlequins are medium to large sized rabbits. Mature individuals weigh an average of six to eight pounds (2.7 to 3.6kgs). The markings are complex, but are best described as checkered.

They are always white and some other color, including black (the most common), chocolate, blue, or lilac. The color patterns of the Magpie Harlequin are quite beautiful and very specific, half of their head is white and the opposite side has a white ear. The rest of the body should have alternating bands of white.

The forepaws are the same color as the ear on the same side and the hind legs are the opposite color. Because the color pattern requirements are so strict for the show ring, breeders may often have difficulty attaining them. The Magpie Harlequin can also have several different coat types aside from the standard normal coated variety including astrex and rex. These striking rabbits are also well muscled and strongly built. 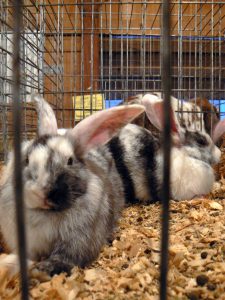 Their bones are medium in size and their bodies are typically firm, rather than soft to the touch. The majority of Magpie Harlequins have hazel eyes, however a few have brown or blue eyes. Their ears are four to five inches in length can stand upright. White feet will show up sometimes on a Magpie Harlequin, which is a fault in a show. They have soft, thick fur that is an inch long. Female Magpie Harlequins are generally about a half a pound larger than the bucks.

The first Harlequin rabbits were developed from Dutch rabbits with tortoise-shell coats in France. They were originally known as Japanese Rabbits, and were first shown in the 1880’s. Magpie Harlequins are similar to the original Harlequin. Sadly the Magpie Harlequin was extinct for a while, but fanciers of this rabbit can thank a breeder in Great Britain who brought them back into existence and popularity.