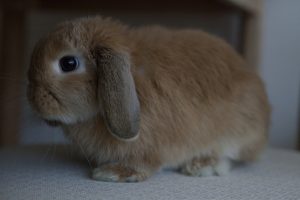 Miniature Lops, also known as the Holland Lop, have become very popular in the past few years.
Miniature Lops are relatively easy to take care of. They mostly eat alfalfa pellets, but enjoy treats of oats, sunflower seeds, corn on the cob, carrots, apples and oranges.

Miniature Lops should be fed at the same time each day. You may also give them a salt block, if you like. Clean out their ears if they are dirty and clean out their cages regularly. Litterboxes should be cleaned daily, if no litterbox is used cages may need cleaning more than once a day.

Miniature Lops, a smaller version of the Dwarf Lop, weigh six and a half to eight pounds. Their body structure is small, compact and blocky. Some colors they come in are: agouti, black, chinchilla, broken and sooty fawn.

The Miniature Lop was developed as a cross between the French and either Chinchilla or Netherland Dwarf. It has been reported that Miniature Lops are prone to getting bad teeth. One way to help prevent this is to feed plenty of hard vegetables. 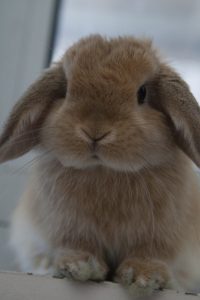 Also provide chew sticks and bits of wood. It is important that they be given ample opportunity to chew for the health of their teeth. Miniature Lops breed year-round and generally have five to eight kits. A Miniature Lop’s typical gestation period is 31 days.

After about 27 days, the doe will start pulling out some of her fur to build a nest. When that occurs, put a nesting box in the cage. There should be hay in the bottom of the box and the doe’s fur on top of the hay. Their mother will be very protective of her kits at first.

You will notice the kit’s ears start to droop when they are six weeks old. They will be able to breed at the age of three to four months, though it is advised to wait until they are 6 months told to begin breeding.