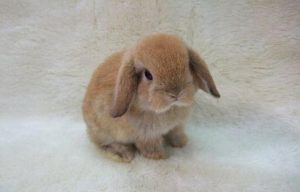 The Mini Lop is a great garden pet as well as an excellent house rabbit. They are friendly, social and have terrific personalities. The Mini Lop, also called the German Lop, is often described as having a large personality in a compact body.

They are friendly and social animals who love the company of other rabbits in addition to loving their human families. They can be prone to jumpiness, but in general they are very lovable. They will live well with other rabbits, but two males need to be neutered or fighting can occur, leaving one or both with severe injuries.

The Mini Lop not only makes a wonderful garden and house pet, but he is also bred for show. Unlike Angoras, the Mini Lop only requires minimal grooming. They shed once or twice a year and only need grooming during this period.

The Mini Lop is an intelligent rabbit that can even be trained to walk on a harness. They are easily litterbox trained, especially after spaying or neutering. For this reason they are often found living indoors “cageless” as they are so well behaved when integrated into the family.

They are highly social and crave attention from their family members, as well as ample run time. A mini lop caged more often than allowed play time indoors may become destructive out of frustration. They are highly intelligent and enjoy learning tricks and games with their owners and make excellent indoor companion animals.

Contrary to popular myth, lops are not “laid- back” rabbits and the smaller the breed, the more exercise and run time they need for their own mental and emotional wellbeing. Lops in general become lonely when ignored for long periods of time, and a few hours every day should be set aside for both the indoor and outdoor lop for one on one playtime and socalization, or else they may become fearful and aggressive from lack of social interaction.

When given lots of attention and room to run and play, the lop is a loving companion animal that is genuinely affectionate towards its family members, and has a sense of humour and fun that is incomparable to any other breed. It should be noted that young Mini Lops may have be more aggressive than older individuals.

The Mini Lop should be housed in a cage with ample space. 18 X 30 X 30 is an acceptable size for both males and females. The males can be housed in a slightly smaller cage. When keeping your Mini Lop, it is important to remember that dogs are a direct danger to them. It is of particular importance if you house your Mini Lop outside.

Overall the Mini Lop has about 50 different color varieties if you include all of the broken and tricolor combinations. They are smaller than many lops with adult males weighing an average of five and a half pounds and females at about six pounds. Generally the average Mini Lop will average between four and seven pounds. The Mini Lop has sometimes been confused with the Holland Lop.

They are, in fact, rather different looking. The Mini Lop has a thickset body with slightly heavier hindquarters. His head is wide, with two medium long, wide lopped ears. The history of the Mini Lop seems to be under some debate. Some sources state that they are believed to be descended from a cross breeding between the French Lop and the Holland Lop.

Though others report that they were created long before the Holland Lop, and thusly this would not be possible. According to the Mini Lop Rabbit Club of America these rabbits were created in 1972 in Germany as the result of a crossing between a German Lop and a Chinchilla rabbit. Their original German name was “Kein Widder”.

After they were imported to the United States more crossings were done to introduce Broken colors. The Mini Lop was officially recognized by the America Rabbit Breeder’s Association in 1980. Mini Lops are pretty easy to care for. They usually do need to be brushed during their moult (when they shed out their old fur) because the coat is very thick and slightly longer than most breeds’ fur.

Also watch carefully for signs of hairballs which include not eating, hair in the stools, and loosing weight.
Mini Lops tend to have good sized (four plus babies) litters and are good mothers. They conceive fairly easy. The Mini Lop females should be bred the first time prior to reaching one year of age and males before three years.

Mini Lops can be bred any time of year, though time of birth can affect coat density. If you want a Mini Lop with dense fur it is recommended that breeding be planned so they are born in the winter. If you want a Mini Lop with longer ears, it is recommended that they be born in the summer. The average gestation time is 28 to 32 days.