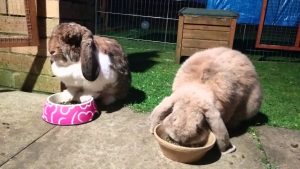 The French Lop is a popular pet rabbit. They are adorable and affectionate. French Lops are fun rabbits. They can do tricks and they play well with other animals and even small children. Not only are they full of fun, but also they are very gentle and enjoy being held.

French Lops are also easy to take care of and they can be litter box trained. They do need to be brushed sometimes and have their claws trimmed regularly. French Lops are rather large. They weigh at least 10 or 11 pounds, but some can weigh up to 22 pounds.

French Lops have a big, round, stocky, and muscular body. In a show, they body type is the most important. They have a head similar to a French Bulldog’s head. The French Lops ears lie close to their cheeks and fall an inch and a half past their jawbone.

French Lops came from France and England. They are said to be either wild rabbits that were domesticated or they are a cross between English Lops and Flemish Giants. Since the mid-19th century they have been known as French Lops. 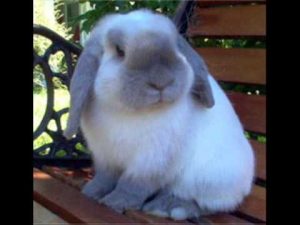 French Lops should have an enclosure that gives them plenty of room to stand on their hind legs and stretch out. Additionally it is easier to litter box train them if they have a solid wood floor in their cage and a litter box is placed in the cage with them this techniques tends to help litter training since most rabbits hate getting dirty and will prefer to use the litter box over getting excrement on themselves from it being on the floor of the cage.

When training French Lops it is important not to use the cage as a punishment. When taking the rabbit from its cage gently coax the rabbit out of its home, do not reach in and grab it suddenly as this will often frighten the rabbit. Cages should be cleaned daily.

French Lops should be fed high quality rabbit pellets with at least 14 percent protein and hay a few times a week. They can be given treats of toast, carrots, apples, chemical-free dandelion leaves, saltine crackers or a cookie every once in a while.

Growing French Lops need as much food as they want, and often require extra feed such as calf manna or other supplements. They have large litters and are usually great mothers. The mother and babies should be fed full feed, as much as they want.