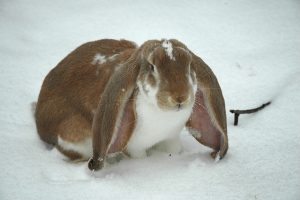 The English Lop is one of the oldest breeds of rabbits, and they also have the longest ears, at 28 inches. They are mostly known as a show breed, but they are very friendly, too. English Lops are very loveable and very friendly.

They are also quite calm and laid-back. They will need special attention to their delicate ears, as well as a large hutch to accommodate their longer-than-average ears. The most striking feature of the English Lop are its ears. Its ears can be as long as 28 inches, but the average is about 23 inches.

Shaded, self, ticked, wide band, agouti and broken are the six colors. The most common colors are fawn, chestnut agouti, tort, black and lynx, and these colors may be broken. In order to show an English Lop, its ears must be at least 21 inches long.

They should have a well-proportioned body with their ears. Ears are no longer the sole basis of judging. However, there are still standards that could result in lost points if the ears don’t meet them. The ears cannot look pointed and must not have any blemishes, pimples, scratches, or bruises. 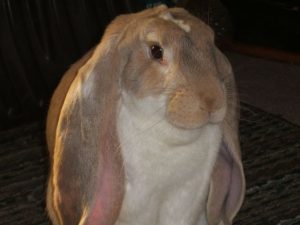 English lops will be disqualified if there are any large rips or holes in the ears. They will also be disqualified if it has a “pigeon breast”, unlike a normal breast, which is flat and unnoticeable. English Lops are one of the oldest breeds of rabbits.

No one is exactly sure where they originated, but it is most commonly thought that they are from a part of Africa called Algiers, which often experience extremely hot temperatures. The English Lop’s ears were affected by the weather, which could be why their ears are so long.

There is proof that the breed has existed for a long time because Egyptian hieroglyphics that depicted the English Lop have been found. They are called English Lops because the English made them into a show animal. The Germans, as well as most Europeans, were also big fans of English Lops.

The English Lop became an officially recognized breed in 1914, a time when they were bred exclusively for their ears. However, this was very damaging to the breed, due to inbreeding, but in the past decade or so, the breed has made a comeback. English Lops are once again very healthy and popular.

The Velveteen Lop, American Fuzzy, Mini, Holland and French rabbits are all descended from English Lops. English Lops should have their ears cleaned once every two or three weeks and nails should be trimmed at least once a month so they do not rip their ears.

Breeding an English Lop can be difficult due to its long body. A litter usually consists of eight to 10 kits. Does normally have a good maternal sense and rich milk. During the first 16 weeks of an English Lop’s life is when its ears grow most.

Their ears must be very well cared for then. English Lops are born with normal sized ears, but after the first week, you’ll notice the ears will be twice their size. For about a month, each week the ears’ size will double.