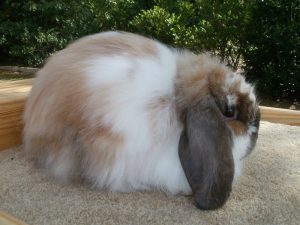 They have superb dispositions and make wonderful pets, as well as show animals. They also come in many colors, but make sure to get a rabbit that is in a color recognized if you are going to show it. Also make sure to get one that has the required markings which are listed on its registry’s breed standard.

Bucks tend to be less excitable than does. Both genders are very sweet, but they can be (especially does) very skittish so move slowly and don’t make loud noises around them. American Fuzzy Lops have a long coat so they need to be groomed.

Their coat will get to two inches long and comes in many colors.The color patterns can be solid or broken. Good color is very important in judging. The wool is a little rough, thick and an even length. As babies, American Fuzzy Lops have less guard hairs that keep the coat from matting.

After about six months of age, the rabbit should have a good number of guard hairs, so its fur will be less prone to mat. American Fuzzy Lops have a compact, muscular and even body. They should not appear bony. They have big, round heads and they look like they don’t have a neck.

Their heads are set moderately high on their shoulders. They have ears with short (regular) fur that should hang down next to their cheeks, about an inch lower than their jaw. In a show, the American Fuzzy Lop cannot weigh more than four pounds. Seniors, rabbits six months or older, cannot still have their baby wool. 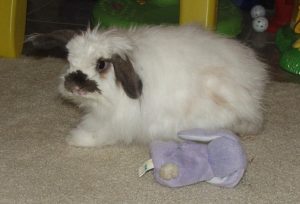 The American Fuzzy Lop was developed when breeders wanted to make Holland Lops that had broken patterns. These breeders bred Holland Lops to English rabbits, however, these rabbits did not have the rollback fur of Holland Lops.

Then the breeders bred the rabbits to French Angoras. The bunnies resulted in the early version of the American Fuzzy Lop. Today’s American Fuzzy Lop has a coat that is much better. The old coat used to get snarled almost immediately after grooming, but now the coat needs only minimal grooming.

Some breeders report that grooming may only be needed a couple of times a month for adults. During shedding season, which occurs twice a year, groom them once a day or more. If they are not groomed enough matting may occur. Though, not all baby coats matt, it depends largely on the bloodline of the rabbits, and high humidity can make matting worse.

In general most hobbyists report that the American Fuzzy Lop is easy to breed, but because they are a dwarf breed and can have genetic problems they are classified as relatively difficult. The genetic issue is that a “peanut” may be born in a litter.

This is a baby that inherits the dwarfing gene from BOTH parents. Peanut babies do not have a developed digestive system and do not survive. This is true with most dwarf breeds. The number of peanuts born to a litter is variable. Some litters have none at all.

Most breeders report that American Fuzzy Lops are calm, thigh some may be excitable and for this reason mothers should not be bothered much the week before they have their babies until the first week after they have had their babies. The wool around the genital area may need to be clipped before breeding. Gestation averages between 28 and 32 days.