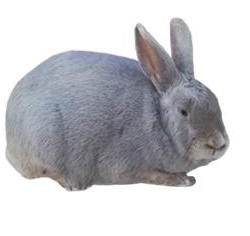 The Lilac Rabbit, a breed that once faced many imperfections in its fur, has now been perfected! Ironically, however, just when the Lilac Rabbit has become exquisitely soft and silky, these docile animals are quickly becoming a rarity!

The Lilac Rabbit is a delight to the eye as well as to the hand; these rabbits are unbelievably silky and are gorgeously colored. Bred for their fur, Lilac Rabbits need regular and careful grooming to keep their luxuriant coats neat and clean. These docile, sweet rabbits are a joy and a beautiful addition to any rabbit owner’s home.

Lilac Rabbits weigh five and a half to seven pounds, on average. They have compact, cobby bodies with a neat appearance. Lilac Rabbits are lilac, obviously! Their eyes match their coats in color, which is best described as a pink tinted dove gray.

The coats are thick and silky to the touch, and the coloration should be uniform and carried clear down to the skin! Lilac Rabbits have lovely curvaceous hindquarters, and their heads are short, topped by short, well-furred, upright ears! The legs are short and straight like the ears.

It was first introduced in England in 1913. About two years earlier, a Dutch Lilac Rabbit called the Gouda was also developed. In 1922, a professor named R. C. Punnett was the first to officially create a documented second method for breeding Lilac Rabbits.

Punnett’s litter was black, but when he interbred them, black, blue, brown and lilac kits resulted. Thus, the true-breeding Lilac Rabbit was introduced. In the early years, Lilac Rabbits often had fly-back coats. They had heavy bones and their coats tended to be quite thin and unpleasantly harsh in texture.

Lilac Rabbits also suffered from discoloration; they had lots of white hairs found in the area of their armpits! Today, however, these problems have been bred out, the Lilac Rabbit has been perfected with a very thick, dense, and smoothly textured luxuriant coat- no fly-backs are acceptable!

In show, your Lilac Rabbit will be disqualified if it shows any white hairs in its armpits, toes or body! Blue coloring in the coat is also a fault, as is a dirty or brown- or putty-stained nose. Lilac Rabbits are typically shown in a D sized ring.