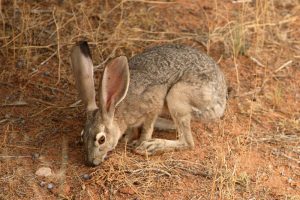 In summer, they eat more green or herbaceous plants while the winter forces them to eat more woody or dried plants. They eat a lot for their size- Jackrabbits graze constantly and obtain most of their water from their food! 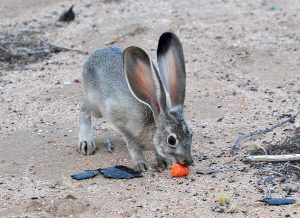 They elude predators like snakes, owls, hawks, bobcats, coyotes, and foxes with their speed, zigzagging away at up to thirty-five miles per hour instead of taking cover. They also rely on leaping, and can jump twenty feet in a single bound!

Black-tailed Jackrabbits can maintain forty miles per hour and more on a straight course for over a mile. Orphaned young Jackrabbits raised in captivity cannot be re-released in the wild, as they cannot fend for themselves.

Other captive Jackrabbits include those used to bait hounds in races or hunting trials. They are wild animals and are not recommended as pets, but if a Black-tailed Jackrabbit must be captive it needs fresh water at all times. A rabbit pellet diet supplemented with lots of grasses or green food will be fine, and the Jackrabbit should have some sort of brush cover to hide under in his enclosure. 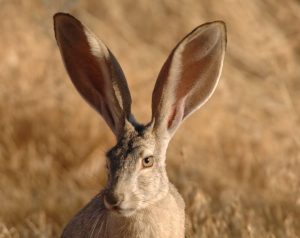 Black-tailed Jackrabbits prefer the open deserts and grassland of southwestern North America. They are considered a pest to farmers and orchard keepers and are widely hunted for food or sport or used in hunting hound trials or greyhound racing.

Jackrabbits are not considered game animals, which means they may be hunted without restriction. Like any wild animal, Black-tailed Jackrabbit meat may have tularemia, parasites, or other diseases, so be careful when handling them. 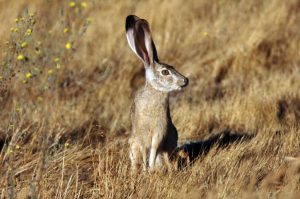 Black-tailed Jackrabbits breed year round. They may have one to six litters of one to eight young per year! The average litter size is three, and young Jackrabbits are known as leverets. After a gestation period of about 45 days, the leverets are born fully furred and sighted!