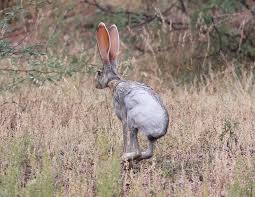 Perhaps you’ve heard of the legend in the southwestern United States concerning a mythical creature, the Jackalope, said to be a jackrabbit with antelope horns. Although this creature doesn’t exist, the Antelope Jackrabbit, probably the progenitor of the Jackalope due to its name, does! These lovely hares can be found in many southwestern North American regions are active and interesting to observe.

Antelope Jackrabbits prefer to live in areas of creosote and mesquite scrubland. They eat various types of vegetation, from grasses to leaves and cacti. Many will stand on tiptoe to reach higher branches when choice material has been grazed off. Well adapted to desert life, Antelope Jackrabbits absorb moisture from their food, and it is very rare that they are seen to drink water. They are nocturnal, feeding at night and in the early morning or late evening hours.

Their calls are soft and made with a “chuck” noise. The Antelope Jackrabbit will also cry out if it is distressed. When frightened, Antelope Jackrabbits will dash away from danger, flashing their white rumps in the air to warn other hares in the area that a threat is imminent. During the day, they rest under the shade of a plant, backing into vegetation so they are obscured from aerial predators. At rest, the Antelope Jackrabbit’s ears cover its body. 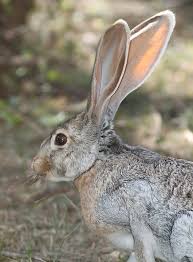 The ears, head, and neck are light brown in color, and the body of the Antelope Jackrabbit is also sandy. Many may have some white coloring over their sides and their ears are often edged with white. The underside is also white. Antelope Jackrabbits are the largest hares found in North America.

Antelope Jackrabbits can be found in the southwestern United States and northern Mexico. However, their ranges are extremely limited. They have been reported only in the southern state of Arizona in the United States and in a single coastal area of northwestern Mexico. Also, they occupy only Sonoran habitat areas between altitudes of sea level and 1,200 meters above. 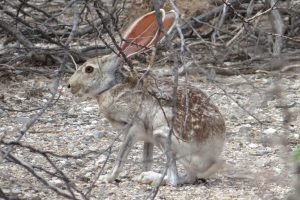 For this reason, they should not be exposed to other rabbits that could be carrying diseases, and they should not become accustomed to humans. If you find an injured Antelope Jackrabbit, you should call your local wildlife rehabilitator for detailed care or release instructions.

Antelope Jackrabbits usually breed year round, and probably reach sexual maturity before they are a year old. Usually between one to five young are born. Courtship involves males chasing females and physically boxing other males.