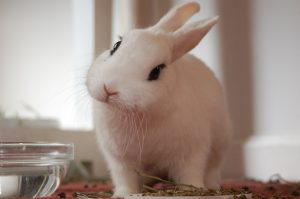 With adorable black spectacles, the Hotot Rabbit is a French breed who has the appearance of a scholar! Pure white with the black circles about the eyes, the Hotot, or Blanc de Hotot, is an adorable rabbit that is a relatively new immigrant to the United States!

Bred for its meat, fur and as a show animal, the Blanc d’Hotot is truly an all-purpose rabbit! Requiring regular and careful grooming to keep its white coat spotlessly glowing, the Hotot is a spectacular rabbit with a striking appearance when cared for correctly! This docile rabbit makes a perfectly adorable friend!

The bodies also taper on the sides. With their striking coats, there is no mistaking the breed when viewing a Hotot Rabbit; no other rabbit has such a sparkling white coat with thin-rimmed black spectacles and black eyelashes! The spectacle circles should be between a sixteenth and an eighth of an inch thick. Blanc d’Hotot Rabbits carry their ears tautly in a “V”shape and have bright brown eyes. In show, Blanc de Hotot Rabbits are a six-class breed!

A French woman named E. Bernhard, living in Hotot-en-Auge, is responsible for beginning the line of rabbits that produced the striking Hotot Rabbit! Though the date on which she began her experiments is unclear, many place it as 1902. Bernhard began by breeding Checkered Giants, her goal being a rabbit equally good for meat and fur, and attractive enough for show.

She had to breed her stock over 500 times in order to produce the Blanc de Hotot Rabbit we know and love today! First, she bred the flank spots, then the ear and spine markings, and last the eye circles, out of the Checkered Giants. The eye circles refused to completely disappear and by 1912, the Blanc de Hotot Rabbit we know today had become a true breeder.

After World War I, the Blanc de Hotot received its name from its coloration and its origin! In 1920, Bernhard showed her rabbits for the first time at the Parisian Exposition Internationale d’Aviculture, calling them Geant Blanc de Hotots. In 1922, the Blanc de Hotot was accepted as a white rabbit with black eyelashes and gray lower lids, by the Commission des Standards de Francis.

In 1927, the Blanc de Hotot was introduced in Switzerland, where it became immensely popular; eventually the breed became centered in Berne. On June 25, 1978, Bobby Whitman imported a French pair of Hotots to Houston, Texas. The next Blanc de Hotots were imported soon after, on July 2, 1978. These came to Albuquerque, New Mexico, under the care of Margaret Henderson. From these original rabbits the first litter of American Blanc de Hotots was born on July 24, 1978. 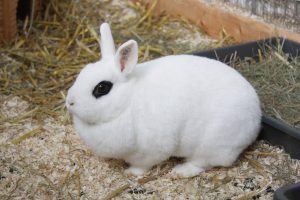 On March 5, 1979, after having been shown in New Mexico, the Blanc de Hotots were accepted as an American Standard in Saginaw, Michigan, at the 55th Annual ARBA Convention and Show. On May 21, 1979, the Hotot Rabbit Breeders International organization was founded and supported by the ARBA, to the immense joy of enthusiasts!

In show, if your Blanc de Hotot Rabbit exceeds weight limitations, it may be shown in higher weight classifications for older rabbits, provided it is a junior or intermediate rabbit. The accepted genetic formula for Hotot Rabbits is aa B_ C_ D_ E_ EnEn Dudu, with the EnEn representing English spot genes and the Dudu representing Dutch genes. The Blanc de Hotot is also available in a dwarf version weighing only two to three pounds!