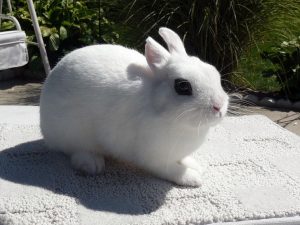 The Dwarf Hotot (pronounced ho-toe) is quite popular due to its active, and endearing personality. They are very responsive to human interaction. Dwarf Hotots are relatively easy to keep because they don’t need a large cage (about 24 by 24 inches) or a lot of feed. They do require a lot of attention, however. They are also good at keeping themselves entertained when no one is around, but they don’t like to be ignored for long.

Dwarf Hotots are relatively small, compact, and weigh about three pounds. Their ears are around two to two and three-quarters of an inch long. The Dwarf Hotot is all white with a thin black band that encircles their deep brown eyes. Feed the Dwarf Hotot a quarter of a cup of rabbit pellets. They tend to overeat if they are allowed to, but that isn’t good for them. They can be given a treat of rolled oats or carrots every once in a while.

Because Dwarf Hotots love to play, they can knock around their food and water bowl, so make sure that they are heavy enough or fastened to the cage. To keep them busy, they enjoy simple toys in their cage, like a small ball or a cardboard tube. Dwarf Hotots sometimes get so eager to see their owner that they can fall out of the cage.

You can train the Dwarf Hotot to sit in your hand peacefully with you when you walk around. Since rabbits wash themselves like cats, they can get blockages. This is when they get too much fur in their stomach and it obstructs their digestive system. Blockages will cause them too not eat, so it can be serious.

If a rabbit isn’t eating as much as normal, it may have a blockage. Another way to tell is if it has droppings that resemble a string of pearls. An easy cure is to squeeze a little bit of a cat laxative into their mouths a few times a day. Blockages are easy to prevent if you brush them, or wet your hands, pet the rabbit and the free hairs will attach to your hand. Dwarf Hotots also can have problems with their teeth. 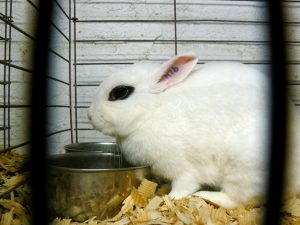 When you acquire a Dwarf Hotot, be sure that its upper teeth are not behind the lower teeth. Sometimes the Dwarf Hotot’s jaws may grow unevenly and the lower half will butt up against the upper half or they will meet head on. If they do not straighten out normally, as is usually the case, do not worry about it, as it is not a health hazard, unless the rabbit pulls its tooth out on the wires of its cage.

Even though that case is pretty rare, you can prevent it by leaving the rabbit toys to keep it busy and away from the wires. Dwarf Hotots generally live 7 to 10 years. Dwarf Hotots originated in Germany pretty recently. They were brought to America in 1980 and became recognized by the American Rabbit Breeder’s Association in 1983. Some Dwarf Hotots may have a problem with malocclusions, due to their rounded heads.