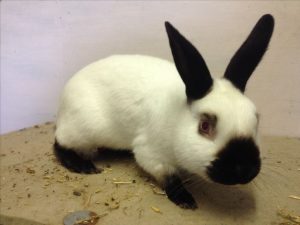 They are very easy to handle and make excellent pets for adults and children alike. They are very loving and are much smaller, adding to the pleasure of handling these sweet creatures. The Himalayan Rabbit is particularly sensitive to excessive temperatures. Changes in temperature will directly effect the coloring of their coats. Cold weather intensifies their markings, while hot weather causes them to fade.

Any white present on your Himmie will turn yellow of they are exposed to direct sunlight. This should be kept in mind if you are planning to keep your Himalayan in an outdoor hutch. The Himalayan, like many other rabbit breeds, is a social creature and should be allowed time outside of his cage with his human family.

They love to wander and explore as well, but bear in mind that a rabbit loves to chew and he will chew on a variety of household items. It is wise to supervise them at all times when they are out of their cages. Socialization in this way is important, another way to help socialize your Himmie is regular grooming sessions. When you have to place your Himalayan back in his cage, remember to give him tube toys and balls to play with. This will prevent them from becoming bored.

The Himalayan Rabbit is a small rabbit, weighing between three and four pounds at adulthood. They are long and lean and have angular hindquarters. They are the only breed of rabbit with the cylindrical body type. Their bodies should be very long, trim, and smooth. The topline should be flat when viewed from the side, and the hips should not protrude. Their beautiful coats make them quite distinctive. Their fur is short and glossy.

Its color is white with distinct contrasting markings, which are seen on the tail, ears, nose and feet. This type of pattern is referred to as ‘pointing’. When the Himmie is born they are all white, their colors begin to show when they are approximately three months old. The standard color for the markings is black, but European Himalayans are also accepted in brown and blue as well. The four types of color patterns are called; Black, Chocolate, Lilac and Blue. The eyes of the Himalayan Rabbit are red. They have an egg shaped nose marking and erect ears.

The Himalayan Rabbit is one of the oldest breeds of rabbits. Today they are perhaps the most widely distributed of all domestic rabbits. They have been known for centuries throughout the world. The exact origins of this rabbit are uncertain. Much of the research seems to believe that they are either from the east or European in origin, but no one is certain. 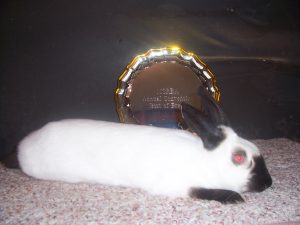 Because this breed has been known throughout the world, it has been called many names such as; Russian, Chinese, Black Nose and Egyptian. Being an ancient breed, it’s fuzzy history comes as no surprise. Some sources claim that the Himalayan is the result of crossbreeding various other types of rabbits, while other sources say it is the only breed not formed by crossbreeding. It is known that the blue, chocolate and lilac color varieties are entirely man-made.

Himalayan rabbits are very easy to care for – they require two to four ounces of rabbit pellets, (a minimum 14% protein is recommended), Timothy Hay, and as much water as they will drink. Clean cage conditions are of the utmost importance. If the cage has an all-wire bottom, a piece of untreated pine board approximately 6″ by 8″ would be appropriate for the rabbit to sit upon. And of course, give your Himmie as much love and attention as you can – they will respond very well. They love to be held and cuddled; just always be gentle.

Himmies are relatively easy to breed, and their average litters are between four and eight kits, with six being the average. If the doe is overweight, she may not produce due to the excess fat stored around her reproductive system. Be sure she is fine form. Many breeders report that the best times to breed are in the spring and late fall.