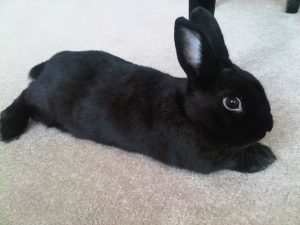 Havanas, with their beautiful, shiny, and rich colored coats, are seen in shows and also make nice pets. Havanas are a very docile breed, being preferred over Holland Lops by some pet stores due to their great temperament. They are very laid back, and are not an active breed of rabbit.

Because they are small they do not require the extra cage space or feed as is the case with some larger breeds. Their nice personalities may be a result of their descent from the Dutch rabbit. They are relatively popular as a show rabbit in the United States, and remain popular in Europe as well.

Havanas weigh about six pounds or two and three-quarters of a kilogram. The recognized colors are black, chocolate and blue. The chocolate color looks purplish and often turns heads. The color of the fur should extend far down the hair shaft, with pearly gray color at the very base.

A Havana’s coat should be closely packed together and rest near to its body. The fur should also be soft, shiny, of uniform color and about an inch long. The individual hair should be thin. Because of all these qualities, the Havana’s fur is very beautiful. It is important to know that the quality of fur is more important than the color.

The Chocolate Havanas have dark ruby eyes that when put in low light they appear to be a deep, dark red color that is sort of “glow in the dark.” The Havana’s body is small, short and compact. They have a little head, hardly any neck and very delicate bones (even more so than most other breeds).

Havanas also have muscular shoulders and a full, rotund rump and hindquarters. Their ears should be carried upright. A Havana will be faulted in a show if its body is too long and has a flat backbone, or one that just looks out of proportion.

A Havana will also be faulted for white hairs or toenails, a pinched nose, long ears, or a mealy color. Havanas should not be shown when they molt because the color of their fur will be patchy. Broken (spotted) Havanas are currently being shown in the United States in order to get them accepted for show. The broken pattern is white in conjunction with any recognized color (in the Havana’s case, that is Black, Blue, or Chocolate). 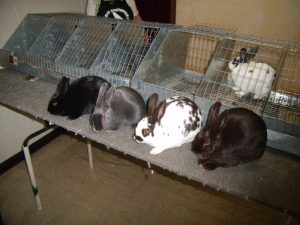 A Broken Havana that is to be shown must have color on its nose/muzzle area, color around each eye, color on both ears, and color on the body. The colored portion is to be at least 10% of the entire rabbit and no more than 50%. No one is sure of the Havana’s lineage. Havanas originated in Europe where the first one showed up in a litter from a Dutch doe. No one knows who sired the litter, however. They were first bred in Holland in 1898.

The first Havana appeared in a show in 1899 in Utrecht, Holland. They became popular in Europe and were widely bred not long after that. The Havana was brought to England in 1908 and to the United States in 1916. Havanas do not require any care other than that of a normal rabbit aside from being kept out of direct light if they are to be shown or the colour may take on a rusty look.