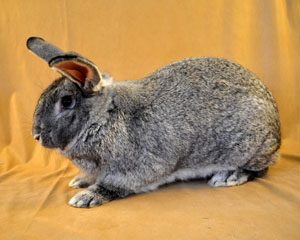 Giant Chinchillas called the “Million Dollar Rabbit” or “The Gentle Giant”, are larger versions of regular Chinchillas so they retain the excellent Chinchilla personality and beauty, yet they are a lot bigger. They are a very gentle and sweet breed that loves attention.

Giant Chinchillas make excellent pets for anyone. They love being petted and given any attention. They make great house pets as well. They are also fond of playing and almost never bite. They are fun and an unusual rabbit that many people admire. They do require extra cage space due to their size.

As far as feeding they should have a diet of rabbit pellets and a small handful of hay. The Giant Chinchilla will eat more than some of the miniature breeds, but they eat about the same as most of the large breed rabbits. Giant Chinchillas are also quite popular in shows.

Another benefit for breeders is that they don’t have to house the young rabbits for long because they can be weaned early. Giant Chinchillas weigh an average of 16 pounds. Giant Chinchillas have a big, muscular, solid, and commercial mandolin type of body that is semi-arched. 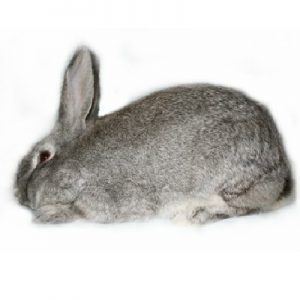 They hold their ears upright. Giant Chinchillas have very pretty fur, which makes them a popular show rabbit. In a show, there is only one variety that they are categorized in. Bucks may not be over 15 pounds and does cannot be more than 16 pounds. Giant Chinchillas are almost never aggressive and they love to play. In a show, a Giant Chinchilla will be disqualified for short or skinny bodies.

Ed Stahl developed the Giant Chinchilla in Kansas City, Missouri. He selectively bred White Flemish Giants, among other breeds with Standard Chinchillas that were larger then average. On December 25th, 1921, the first kit that met his specifications was born. The next year, she was exhibited and called “The Million Dollar Princess.”