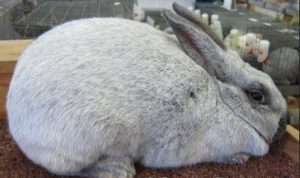 The French, Argente, or Champagne d’Argente Rabbit, is one of France’s oldest breeds of fancy rabbit, and is also one of today’s rarest rabbit breeds! The French Rabbit is has both meat and fur properties, and today makes a stunning show animal with its lovely coat. The Champagne d’Argente Rabbit will need regular and careful grooming to keep it from becoming uncomfortably matted, but with its striking appearance and docile personality, is well worth your time and energy!

The Argente Rabbit weighs between nine and eleven pounds. They are available in four colors: champagne, blue, cream and brown. Each coat is given the effect of well-worn silver by the longer black guard hairs, which are interspersed throughout the fur. The champagne French Rabbit is a whitish-blue rabbit, with silver tipped fur and a slate-blue undercolor. The desired color is that of bluish white or old silver, with no hint of yellowing.

The blue, or bleu Champagne d’Argente, is a silver-tipped lavender color. The cream, or crème Argente Rabbit is cream with lovely orange tips. The brown, or brun color is various shades of brown. In all colors, the shade should be very even, with the black guard hairs evenly interspersed- too may or too few will ruin the lovely effect of the coat. The head, feet and erect ears should be the same color as the body. The hindquarters, back, and shoulders of the Argente Rabbit are strong and well developed, and the body is of medium length.

The French Rabbit has been raised in France for more than one hundred years, where it is a fancy rabbit known as the Argente de Champagne. It was developed in the region of Champagne and thus named for that place and its color, argente or silver in French. Specific markets for the Argente Rabbit, known long ago as “Millers”, were held, since these then-common rabbits were so popular with furriers.

The Argente de Champagne Rabbit was raised for the most part by peasants, who used it for fur and meat, and the early specimens with darker heads tended to have a darker undercolor, as those with lighter heads had lighter undercolors. Today the Argente Rabbit is a fur breed in the United Kingdom and is shown as a six-class breed. It has surprisingly become quite scarce despite its unusual appearance and sweet nature.

Argente Rabbits are born black and acquire the silvered effect as they age, usually beginning to show adult coloring by four months, though this varies with the strain. In show, your Argente de Champagne Rabbit will be marked faults for having a mandolin body type or for any hint of yellow or champagne coloration.