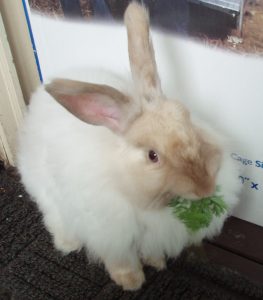 French Angora rabbits have long hair and their wool gives them the appearance that they are wearing a fur coat. That is because their hair is short on their paws and on their face, but the wool on the rest of their body can grow to eight inches. However, their wool should generally only be two and a half to three and a half inches in length. Because French Angoras don’t have long hair on their paws or face, and their wool is coarser than other Angoras, it makes them the easier to take care of than some other Angora breeds.

Angoras originated in Turkey, where they were primarily bred for their wool. They are the oldest rabbit breed. French Angoras, which are older than English Angoras, originated in France. French Angoras may be susceptible to a condition known as wool block. Wool block is caused by ingesting wool when a rabbit grooms himself. If too much wool builds up in the stomach it will mix with food and sit as a ball causing a decrease in appetite.

If left untreated the rabbit may die. Because of the French Angora’s long coat it may be why they tend to be more prone to it than other, less densely coated rabbits. The propensity to this disorder seems to vary among individuals. Colace is very effective against wool block. It should be given a cc at a time up to three or four times a day until the rabbit begins to pass the ‘string of pearls’ type of stool which indicates the rabbits digestive system is passing the wool blockage.

Like many show rabbits, French Angoras may also be prone to wool mites. A common sign of wool mites is wool chewing, though wool chewing can also be caused by a variety of other things such as, protein deficiency, boredom, or the urine of another rabbit (males will sometimes spray females). To help it look its best, it is important to groom the French Angora rabbit regularly. Those who show their rabbits see grooming as an art form, or a skill that must be learned.

A technique called “blowing” is an excellent way to allow one to see the webbing or matting areas and then one may brush or separate those areas during/after the blowing. Use a brush on the French Angora’s paws, face and ears. You don’t need to brush the French Angora everyday, just as needed. One must also take care not to over groom. Over grooming can cause a complete loss of wool. The French Angora’s toenails should be clipped about twice a month.

Not only does this make the rabbit look well groomed, but it also reduces the danger of it hurting itself or other rabbits with long claws. French Angoras sometimes chew on their wool. It could be due to a drop in temperature, not enough protein, or not enough fiber, or they need something to chew on. However, no one knows exactly why some Angoras do this, and may very well be that different rabbits have different reasons. In addition, they may be more inclined to chew their wool when they have itchy skin.