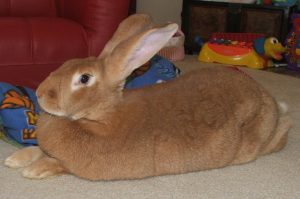 Flemish Giants are nicknamed “Gentle Giants” because they are so sweet, even though they are big. The size of the Flemish Giant makes them hardy enough for even small children to play with. However, if abused, they will fight back and possibly cause injury. Another thing to keep in mind is that Flemish Giants require a cage that is larger then normal and need more feed than normal.

Also, they can get heavy when you carry them around. If you prefer a very laid-back, serene rabbit, then the Flemish Giant is a good choice. On the other hand, if you would prefer an active rabbit that hops around its cage all day, do not expect it from a Flemish Giant. All in all, Flemish Giants are pretty popular, which can make them hard to find in some areas. Flemish Giants are quite easy to take of care of, especially if you train them to use a litter box.

Flemish Giants are huge rabbits; the largest breed recognized by the American Rabbit Breeder’s Association. They average between 15 and 16 pounds and measure 22 inches in length at maturity. Some rabbits as large as 26 pounds have been documents, but this is not the average. Its body should be muscular and mandolin shaped. The Flemish Giant’s hindquarters are wide-set, as is the bucks’ head.

The most common seen color in Flemish Giants is sandy, their natural color. Other colors the Flemish Giant comes in are black, blue, light gray, fawn, steel gray and white. Their closely packed fur is glossy. The Flemish Giant’s ears should be at least five and three-quarters of an inch long and held upright.

The origins of the Flemish Giant are not known for sure, but some think that they are descendents of a rabbit in Argentine called the Patagonian, which Dutch Traders brought to Europe in the 16th and 17th centuries. Written records of the Flemish Giants have been found as early as 1860. In the 1880’s, Flemish Giants came to America, but they did not become popular until 1910. 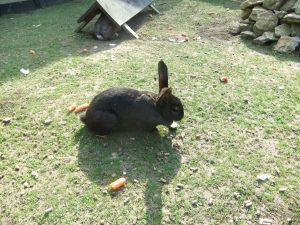 Flemish Giants need to be housed in a cage at least 30 by 48 inches and 24 inches high. Make sure to get a cage that does not have wire floors because they can hurt the Flemish Giant’s feet. Feed them high quality alfalfa and a can full of 18 percent protein pellets. Sunflower seeds added to their diet, will make their coats glossy, but do not feed them too much, because it is a high fat food.

If you decide to let your rabbit roam free in your back yard, make sure it is well fenced and remember that they can burrow. If you decide to let it roam about the inside of the house, keep all electrical cords out of reach, as they like to chew. Flemish Giants can stand the cold well, but they can not tolerate temperatures above 90 degrees. If they must be out in this kind of weather, place a two-liter bottle with frozen water inside for them to sit near.

If you are going to breed your doe, make sure to do so when she is either eight months old or 14 pounds. After that, she can develop fat that surrounds the ovaries and she will not be able to have a litter. If she is bred earlier than that, she could have complications in delivering her babies. Always take the doe to the buck’s cage and watch them very closely while they are together. The whole process will probably last about five minutes or less.

As soon as the doe has been bred one or two times, take her back to her cage. If you breed the doe again six to eight hours after the first time, you can increase the likelihood of her having more kits. When the doe is pregnant, place a nest box (about 12 by 12 by 22 inches) in the cage about three days before the kits are due. (Like all rabbits the Flemish Giant’s gestation time is usually between 28 and 31 days). 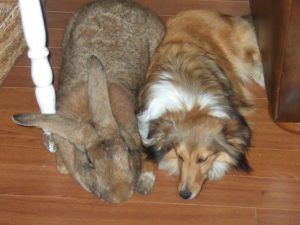 To make the nest box, put two layers of cardboard, or three quarters of an inch of white wood chips and then fill the rest with straw that is clean. Then the doe will make a depression in the straw and put some of her fur on the top. The doe can have anywhere between six and 18 kits, however probably not more than eight will survive. After the birth, replace clean straw and wood chips in the nest box every week for six weeks.

Remove the nest box after six weeks and wean the kits from their mother at eight weeks. Be sure to separate the two sexes when you see the bucks attempting to mount the does. The mother doe can be bred again in six to eight weeks, but if you do breed, do it too quickly, as she might not have a big litter or she could have difficulties conceiving.