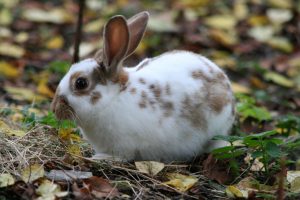 Naturally bright and animated, loving and friendly, the ostentatious English Spot Rabbit has every right to show off, being one of the world’s oldest breeds of fancy rabbit! English or English Spot Rabbits are friendly and love to caper and cavort about! They love all human attention and seem to “show off” when they feel someone is watching!

English Spot Rabbits are also docile, sweet friends and great mothers, often raising other rabbits’ kits as their own! English Rabbits do require a bit of space in which to run about, but 30 inch by 30 inch cages are sufficient for a lone rabbit! English Spot Rabbits will also require regular and careful grooming to keep their eye-catching coats from becoming soiled or uncomfortably matted. With their loving, sociable personalities, English Rabbits will please even the fussiest fancier!

English Rabbits grow to between six and eight pounds, and come in a variety of colors: black, blue, gray, tortoiseshell, chocolate and lilac and gold colors that have not yet been standardized and are not admissible in show. The majority of these rabbits’ coats are white, with markings of the colors specified. 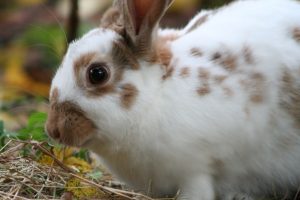 One of the most striking features of the English Spot Rabbit’s coat is the clearly seen herringbone pattern that runs from the base of the rabbit’s ears all the way to its tail along the spine! They carry their four-inch long ears, which are of a solid color, straight up in the air! There is also a clearly marked butterfly smut over the nose and face of English Spot Rabbits in addition to spectacle-like eye circles.

A tiny colored spot is also located just below each eye. Each leg should have a small colored spot and markings on the loins and body should not touch the English Rabbit’s saddle. Chain markings are also visible on each side, starting as tiny spots at the base of the ears and increasing in size as they move toward the loins! There are also six belly or teat markings in the shape of spots! 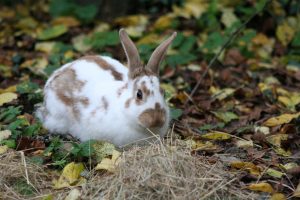 Chocolate English Rabbits are so dark that often the chocolate color is nearly black. The undercolor is a dove brown color, and the eyes are also brown. Grey English Spot Rabbits have brown eyes with a slate undercolor, but the top color is varied of all black hairs, black tan tipped hairs, and black hairs tipped with tan rings. The nostrils, insides of ears, and eye circles should also exhibit tan coloration.

English Rabbits have long, well-arched bodies with long limbs. In fact, they are so tall that you can see daylight between the rabbit and the surface on which he is standing! Though the hips are lovely and round, the bone structure is light to medium. Does are allowed to exhibit a small dewlap.

As one of the world’s oldest fancy rabbits, the English Spot’s origins are nevertheless a bit obscure. It is believed to have come from the English Butterfly Rabbit, though often the two breeds are mistakenly considered to be one. Also, despite the breed’s popularity, many rabbits today are imperfect and it is easy to obtain a miss-marked English Rabbit, even from a top or qualified breeder!

The first description of an English Rabbit comes from 1849, and this breed boomed in England from 1855 to 1860, at which time it appears to have died out somewhat. In 1880, it was revived and new colors were introduced. Previously, English Spot Rabbits had only been available in black! Introduced to America around 1910, the American English Spot Rabbit Club was established in 1924 and today these rabbits enjoy fame worldwide! 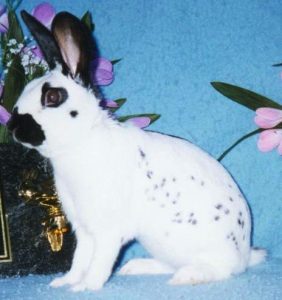 In show, your English Rabbit will be marked faults for stray spots, spots that smear into one another or the chain, butterfly, or herringbone markings. White hairs or patches in colored markings are a fault, as are eye circles that are too thick or ragged. English Rabbits that have been dyed, doctored, or putty-nosed for show are disqualified.

English Spot Rabbits make great mothers and will foster other rabbit breed kits in addition to their own. In a normal English Rabbit litter, half will be correctly marked, while one fourth will be a solid color and the other fourth are known as “Charlies” because they are marked with partial markings and a Charlie Chaplin moustache! Black English Rabbits can be bred to any color except lilac to obtain a Black English kit.