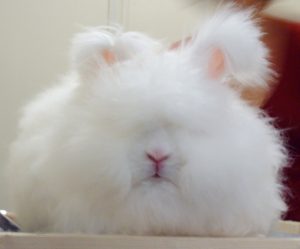 Generally when feeding English Angora Rabbits, straw and hay are the recommended diet. Straw and hay are given easily to babies and mature adults. Alfalfa can also be given, though it should not be given in unlimited quantities, as this may be fatal for the English Angora. Alfalfa may also not be good for babies because it is too rich and may cause diarrhea. Alfalfa should generally only be given in small quantities. In small quantities.

The rainbow assortment of colors that this beautiful rabbit is seen in include; chinchilla, tortoiseshell, sable, pearl, fawn, cream, lilac, blue, chocolate, cinnamon, golden, gray, and black. They are also seen in white. The English Angora is the smallest of the other Angora breeds, weighing approximately six and a half pounds for mature females and five and a half for mature males. They can be as large as seven pounds.

Not much is written on the history of these rabbits, but most theorize that they descended from Ankara Turkey and were brought to Europe hundreds of years ago. The English Angora requires more grooming than some other rabbit breeds. This fact should be taken into consideration before purchase. Their long hair may become severely tangled and matted if they are not brushed frequently.

If one merely brushes the tips of the wool then the rabbit may look nice at the tips, but all of the wool will not be properly cared for. A technique called “blowing” is an excellent way to allow one to see the webbing or matting areas and then one may brush or separate those areas during/after the blowing. If an English Angora is allowed to become heavily matted, they will need to be clipped and in severe cases they may need to be taken to a veterinarian for sedation so that the mats can be removed. One must also take care not to over groom. Over grooming can cause a complete loss of wool. 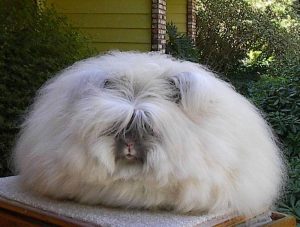 English Angoras may be susceptible to a condition known as wool block. Wool block is caused by ingesting wool when a rabbit grooms himself. If too much wool builds up in the stomach it will mix with food and sit as a ball causing a decrease in appetite. If left untreated the rabbit may die. Because the English Angora has such dense wool this may be why they tend to be more prone to it than other, less densely coated rabbits. The propensity to this disorder seems to vary among individuals.

Colace is very effective against wool block. It should be given a cc at a time up to three or four times a day until the rabbit begins to pass the ‘string of pearls’ type of stool which indicates the rabbits digestive system is passing the wool blockage. Like many show rabbits English Angoras may also be prone to wool mites. A common sign of wool mites is wool chewing, though wool chewing can also be caused by a variety of other things such as, protein deficiency, boredom, or the urine of another rabbit (males will sometimes spray females).

Before you decide to breed your English Angora Rabbit, it may be necessary to perform some grooming on both the male and female. For the male, it is as simple as making sure his genitalia are not wool bound. The female may need to be clipped or plucked. Does ready to kindle do not usually need great amounts of wool trimmed from their tummy/chest areas. They may need a bit just to shorten the wool the doe needs to pull.

Once breeding is ready to begin in some cases, the female may resist the male by running all around the cage. If this should occur, either you can wait it out or you can use the restrained breeding technique. You should talk to experienced breeders for more information on how to properly restrain the female for breeding. Improper restraint can lead to injury for the female. One of the most common occurrences, is not holding the female firmly enough, causing her to harm herself. 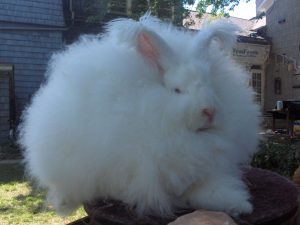 Many inexperienced breeders have inadvertently caused their females to break their backs or legs by improper handling. Once breeding has occurred, the female can be returned to her own cage. Gestation will last 30 – 35 days. The most important thing is to check the nest box on a regular basis to make certain the kits have not tangled their legs or their necks in the wool. A day after kindling is a good time to cut the wool into short lengths and replace it in the nest box. It is also a good time (if not already done) to check for dead babies or afterbirth and excess bloody material that has not been attended to. ( A dead baby in the nest box increases the chance the doe will not go into that box.)

Pregnant females may often stop eating just prior to kindling. This is normal behavior. The addition of new foods in their diet during this time might skew their pregnancy. After kindling they should be given broccoli or other natural items with vitamin C and calcium to encourage the recovery of the doe and the richness of her milk. If the doe does not start to give milk give her sweetened tea instead of water and it should bring the milk down.