Generally, they eat green plants in the summer, including garden vegetables or crops if their natural food is scarce! In winter, Eastern Cottontail Rabbits eat woody plants like apple, blackberry, maple, or sumac branches or bark. Eastern Cottontail habitats always include areas of protective cover.

The best cover is distributed in a wide corridor-type structure of five to fifteen feet. From grazing areas in the open, Cottontail Rabbits make distinct “runways” to the cover, which include rock piles, abandoned animal dens, branch or brush piles, hedges and thickets, or low-growing evergreen stands. To attract a wild Eastern Cottontail Rabbit to your yard, create brush piles in open fields near food sources. 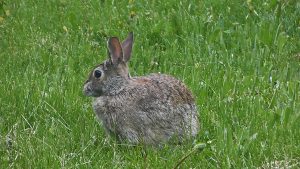 Make them five feet high and about fifteen feet wide, and dense enough to be protected from birds and foxes. Maintain a food supply year round, and create edge land environments. Allow brush and bramble to develop in fallow fields. Plant grass corridors about fifty feet wide near escape cover and hedges to provide a food source. Be aware that these actions may also attract deer, feral dogs and cats, or predatory birds to your area, and that rabbits may effectively destroy your garden or cropland!

Predation by almost all types of wild animals in addition to dogs, cats and human hunters means that an Eastern Cottontail Rabbit’s life expectancy is less than a year! They live alone, and home ranges may be one to sixty acres although most commonly males use about seven acres and females use around two or three. Although Eastern Cottontail Rabbits who are orphaned are often raised in captivity, they are not usually sold as pets.

They are wild animals and are not recommended as pets, and as is true with all wild animals kept in captivity, captive-raised Eastern Cottontail Rabbits should not be released into the wild. This is to prevent the spread or introduction of diseases into wild populations. 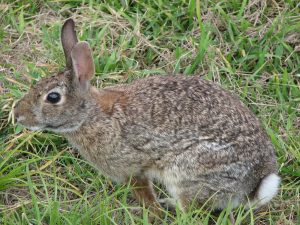 The exception to this is releases done by professional rehabilitation specialists. Provide fresh water for them at all times and plenty of darkness to humor their nocturnal instincts. They need a hiding place where they will feel safe, and do well on a rabbit pellet diet supplemented with fresh clover and grasses. Eastern Cottontail Rabbits may even be kept with such animals as frogs or squirrels.

Eastern Cottontails are generally 12 to 20 inches in length. Weighing between two and three pounds at maturity, they are usually a rusty brown or gray in color. Their undersides are whitish in color to match their fluffy, short, adorable white tails! Eastern Cottontail Rabbits have very long ears, with a reddish patch at the nape of their neck. Often they will have a white blaze on their forehead! Eastern Cottontail Rabbits have powerful, hind legs which are longer than their front legs, and their hind feet are also very long. This allows them to be so fast in escaping from predators!

If you find a wild baby rabbit, leave it alone because its mother ranges far from her nest in search of food and your presence may frighten her from returning to her nest. Watch from afar and if she does not return within the day, call your local wildlife agency. Permits are required to keep Eastern Cottontail Rabbits.

Eastern Cottontail Rabbits do not generally make good pets or thrive in captivity, however, baby Eastern Cottontails are often orphaned for one reason or another. There have been mixed reports about the ease in caring for captive Cottontails.. They tend to do best in an enclosure with good bedding. Soft straw and cotton do quite well.

Some rehabbers also suggest putting in some hair from the orphan’s parents if you can find their original burrow. If you have to nurse with milk, kitten milk replacement seems to work quite well. Feeding should be done three to four times a day on average, but that can vary depending on their age. In addition to the milk they should be given water.

Water can be provided in a shallow dish, though in very young rabbits it may need to be fed through a syringe. Once it comes time for weaning, you can try fruits and veggies, such as peeled carrots, peeled potatoes and apples. You can also try soaking rabbit pellets in the replacement milk.

Orphaned babies may also need extra stimulus prior to the time they open their eyes (about 10 days). Hobbyists have suggested using a cotton ball that has been soaked in warm water to rub against them, simulating what the mother does when she licks her babies. This will stimulate them and encourage them to eliminate. 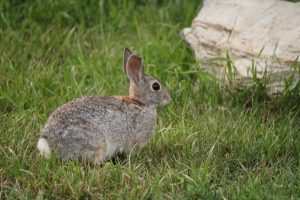 From February through September, Eastern Cottontail Rabbits have courtship displays of frolicking, kicking, and generally wild behavior! The dominant buck will chase off other bucks in the area. A female can have three or four litters of four or five young per year, but most offspring do not survive!

In grassy areas, the doe will scrape out a shallow nest in April to have her first litter. Usually a simple scratched-out depression is lined with grass and fur from her belly. Eastern Cottontail Rabbits are born blind, furless, and helpless. Within two weeks, they are up and out of the nest, foraging for themselves! They reach maturity at four months of age and may breed before winter, although most breed at one year of age in the spring.

Anyone watching an Eastern Cottontail nest from afar is not likely to see the doe come to it, and they still may think the nest has been abandoned when it hasn’t. This is because the doe only feeds her young two or three times a day – before dawn, after dusk and perhaps once during the night.

The doe stays away from the nest during the day (though she may rest nearby in a hidden spot) so as not to attract predators to her babies. To check if the mother is taking care of her babies, you can place a couple of small sticks or pieces of string over the nest. Check it the next day, and if the twigs or string have been moved, then the mother has been there to feed